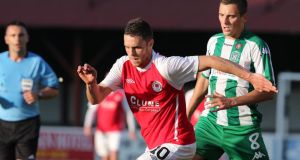 St Pat’s John Russell in action against Lithuanian side Zalgiris.

St Patrick’s Athletic midfielder John Russell says that playing champions Sligo Rovers tomorrow at the Showgrounds (kick-off 3pm) will help the Dubliners to pick themselves up after the disappointment of losing to Zalgiris on Thursday night, with the league leaders keenly aware that they need to improve dramatically on that performance if their title bid is not to be dented as well.

“After a defeat like that you want to get back into it straight away,” said the former Sligo star, “and it will be a great game Sunday, a top-of-the-table clash. Sligo got knocked out in the first round of Europe a year ago and went on to win the league and I think we went through three rounds and our league form stuttered when we came back. Maybe it is a blessing in disguise. We have to take that as a positive and try go on and win the league.

“We are totally focused on trying to win this league. That’s it. It’s nice to play in Europe and it’s a bit of a bonus but ultimately you want to win things and it could be a chance for us to focus only on the league and not worry about Europe. We will move on.”

Killian Brennan and Kenny Browne are both suspended for tomorrow’s game.

In the day’s other game, Drogheda must also put a European defeat behind them as they head to Belfield.
Setanta have confirmed that they will televise the game between St Patrick’s Athletic and Cork City at Richmond Park on July 26th. The game will now have a 6.0 kick-off.

Today FM have announced that they have retained the Saturday commentary rights to the English Premier League for the next three years in a deal that also includes the choice of game on the last day of each season.

1 CVC cuts Six Nations offer by half to €165m as talks continue on new deal
2 Jack Charlton era made GAA sit up and realise its greatest strength
3 Game Changers: Living beyond fear puts Alex Honnold above all others
4 Mikel Arteta warns Arsenal must invest significantly to compete
5 Georgia and Fiji in line to join Six Nations sides in eight-team tournament
Real news has value SUBSCRIBE