Midfielder scores against Candystripes for the third successive season 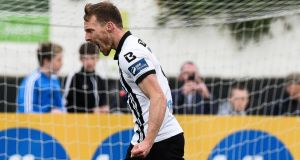 John Mountney hit the back of the Derry City net for the third successive season as Dundalk roared into the next round of the FAI Cup at Oriel Park on Sunday evening.

Derry City manager Kenny Shiels was left stony-faced after watching his side fall behind after just 42 seconds. Sean Gannon burst on to a Patrick McEleney pass on the right and his cross was swept home at the near post by Mountney, the 24-year-old’s first goal of the campaign.

Stephen Kenny’s side went for the kill after that with Michael Duffy peppering attempts at his old side’s goal throughout the first half.

Derry eventually managed to get some sort of a foothold in the game and they were given a sighting of goal in the 23rd minute when Barry McNamee was taken down by Brian Gartland but Nicky Low’s free-kick had too much height.

Dundalk had a similar opportunity three minutes later. Mountney’s run inside was cut short by Darren Cole with Duffy’s subsequent free kick clipping the top of the crossbar.

It looked like Dundalk would pay a heavy price for the missed chances when Aaron McEneff let fly with a stunning effort in the 40th minute, only to see it smack the woodwork with Gary Rogers beaten.

The hosts were handed another warning after just three minutes of the second half when Barry McNamee pounced on a mistake by Robbie Benson but he pulled his effort wide.

Dundalk extended their lead in the 51st minute. David McMillan was tugged back by Dean Jarvis in the six-yard box and the striker made no mistake from the spot, burying his penalty past Ger Doherty.

Doherty made a fantastic save to stop Robbie Benson from putting the game to bed in the 66th minute and play switched to the other end where Dane Massey was in the right place at the right time to pop up on the Dundalk line and stop McNamee from making it 2-1.

That looked to have ended Derry’s hopes but they almost hauled themselves back into it on the hour mark when Lucas Schubert broke from right-back to find himself in on goal but he was stopped in his tracks by a fabulous last ditch tackle from ex-teammate Niclas Vemmelund.

Substitute Jozef Dolny then warmed the palms of Rogers as the visitors pushed for a goal and the tie showed no signs of fizzling out as chances continued to arrive at both ends.

The outcome was finally decided with nine minutes to go when Mountney’s low drive arrowed into the bottom corner of Doherty’s net.

And Duffy put the icing on the cake when he ran on to a through ball by substitute Thomas Stewart to grab a deserved goal and book Dundalk their place in the hat for Monday evening’s draw.