Cork City come from behind to continue Waterford’s poor run 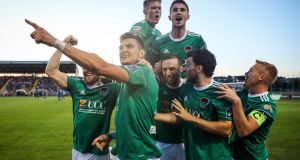 Cork City came from a goal down at Waterford to claim a victory through Graham Cummins’s winner as they regained top spot in the Premier Division.

Although Noel Hunt bagged his first goal of the season on 31 minutes, Garry Buckley’s equaliser just 74 seconds later brought the champions level before a 13th goal of the season for Cummins eight minutes into the second half completed the comeback.

Waterford came into the game on their worst run of the season, two defeats following a draw, and Alan Reynolds didn’t hold back as top scorer Courtney Duffus was dropped.

The English-born striker, whose loan spell from Oldham Athletic was extended last month, hasn’t added to his 10 goals since the stay was prolonged.

Cork were able to recall goalkeeper Mark McNulty, after an ankle injury sidelined the goalkeeper for the last four games, including the Champions League fixtures with Legia Warsaw.

Just eight minutes in and the veteran was called upon in the first chance of the game.

Although Gavan Holohan was floored on the hallway line, referee Neil Doyle allowed Waterford the advantage and Izzy Akinade hared clear on goal to try his luck from an acute angle. McNulty got down well to block the effort with his legs.

Two minutes later and his opposite number, Matt Connor, produced a similar save. The alert Karl Sheppard was swift to latch onto Rory Feely’s underhit backpass only for his shot to be denied by the goalkeeper’s feet.

It was a signal of the contest opening up and Holohan should have profited from the space on 18 minutes. When Stanley Aborah’s crossfield pass was cushioned down by Dylan Barnett into the path of the Kilkenny native, his side-footed shot from 10 yards was tame enough for McNulty to bat it away.

The Cork goalkeeper wasn’t so assured for the breakthrough goal. Hunt still had work to do after he unlocked Cork’s offside trap, collecting Feely’s ball on the left and cutting in. Using Seán McLoughlin to block the goalkeeper’s view, however, Hunt cleverly deceived McNulty by fizzing a low shot beyond him at the near post.

That brought the third-highest crowd at the RSC to their feet but they were soon silenced. Waterford’s defence switched off to afford Cummins space into the box from Steven Beattie’s pass down the right and his cut-back from the end-line found Buckley, who brushed off Paul Keegan and stroked the ball home.

It was a goal which settled the champions and they benefited from more slack marking to forge ahead eight minutes after the break. Buckley, once again, was given too much time to unleash a shot from distance and Connor’s poor parry was capitalised on by Cummins hooking the rebound back over the goalkeeper’s head.

Waterford offered little by way of a response, bar a free header Feely failed to connect with in the dying moments, and they are now in grave danger of losing third spot to Shamrock Rovers.

Ryan Brennan, Ian Turner and Graham Kelly delivered the goals as St Patrick’s Athletic had more than enough to see off bottom-of-the-table Bray Wanderers, who finished with 10 men, at Richmond Park.

Dominant from the start, the home side finally found a way past Evan Moran in the visitors’ goal on 32 minutes.

Winger Conan Byrne skipped inside a couple of challenges on the right before the ball ran loose for Brennan. The midfielder looked up to hit a first-time shot from 25 yards that dipped beyond Moran and into the net for his fourth league goal of the season.

Bray responded to finish the half strongly. Seán Harding crossed for Jake Kelly to loop a header against Brendan Clarke’s crossbar before he himself rifled a drive from distance inches over the top.

St Pat’s regained the initiative and duly doubled their lead 10 minutes into the second half.

Again Byrne was influential, crossing from the right for makeshift striker Turner to sweep home from inside the area for his first league strike of the campaign.

Bray’s Gary McCabe was shown a second yellow card, and sent off, on 76 minutes for a nasty challenge on Jamie Lennon.

Bohemians produced an impressive attacking display at Dalymount Park to comfortably see off the challenge of Limerick.

Following the high of their triumph over Munster rivals Waterford seven days earlier, this result comes as a major set-back for the second-from-bottom Limerick.

The sides had proven to be inseparable during their three previous encounters in this year’s top-flight – which included a 0-0 draw at the same venue in April.

However, Bohs dispelled notions of another scoreless affair when Kevin Devaney headed home from close range in the 28th minute.

Seventh-place Bohs were beginning to play with the kind of confidence that propelled them towards a 6-0 home victory over Bray Wanderers a fortnight ago, and JJ Lunney subsequently doubled their lead with a cool side-footed finish.

Limerick introduced Danny Morrissey and Coleman Hennessy after the break in an effort to halt Bohs’ momentum. Yet, this only acted as a catalyst for the Gypsies to place the outcome beyond doubt.

An unstoppable long-distance strike by midfielder Keith Buckley established a three-goal cushion, before substitutes Danny Grant and Eoghan Stokes’s penalty rounded off the scoring in the closing quarter.

Sligo Rovers warmed up for Monday night’s EA Sports Cup semi-final between the two north-west teams with a deserved victory at the Brandywell.

And it was a thoroughly deserved victory for Ger Lyttle whose use of his second-half substitutes proved pivotal in the end.

In truth, Derry City struggled to get to grips with the game during the early stages of the first half despite having broken the deadlock against the run of play.

Sligo’s Rhys McCabe crashed a shot from 30 yards off the Derry upright with Ger Doherty at full stretch in the 27th minute, but it was the home side who moved into the driving seat in the 35th minute.

Aaron McEneff fed the ball to the hard-working Dean Shiels and when he laid it off to the advancing Jamie McDonagh, the right back thundered a right-foot drive into the net from 18 yards.

Sligo continued to battle after the break and on the hour they went close to restoring equality. Lewis Morrison’s cross was met on the full by Mikey Drennan before goalkeeper Doherty turned the ball around his post.

And Sligo’s determination reaped dividends in the 70th minute when David Crawley timed his run to perfection to get onto a through ball from Lee Lynch and gleefully stroke it home past a startled Doherty.

Sligo then stunned the attendance when hitting Derry on the break in the 75 minute with devastating effect.

Substitute Chris Twardek broke on the right with great pace and his ball to the back post was flicked into the net by fellow sub Caolan McAleer who had entered the fray just seconds earlier.