Premier rivals Chelsea and Arsenal lock horns at the Aviva 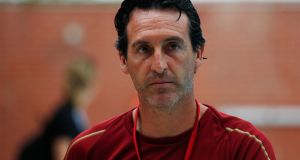 Chelsea play in Dublin for the first time in nearly 30 years this evening when they take on Arsenal at the Aviva Stadium courtesy of the International Champions Cup, a competition it is probably easier to win than fully understand or care too much about.

Its point, of course, is clear with the organisers looking to cash in on the marketability of the biggest European sides and to put some very vague sort of structure on what is, in reality, a fairly random looking collection of preseason friendlies.

It has not, in truth, added much but this has not been enough to deter supporters of the two London clubs from heading along, it seems, with most of the seats sold despite tickets starting at €60.

Jose Mourinho’s comments after Manchester United’s defeat by Liverpool highlighted the makeshift nature of the line-ups fielded by clubs, many of whose best players are only now returning to training following the World Cup.

Both Arsenal and Chelsea are expected to bring a core group of familiar faces to Ireland though with the likes of Cesc Fabregas, Marco Alonso, Alexandre Lacazette and Pierre-Emerick Aubameyang all likely to feature.

Local neutrals can also watch and wonder what might have been as Ethan Ampadu, the hugely promising teenager who qualified for Ireland among others but who has declared for Wales, is expected to play for Chelsea after having done well in preseason so far. Ampadu seems to be highly rated enough to be a part of the club’s first team set-up.

There will be interest amongst Arsenal fans in seeing Emile Smith Rowe, who signed a new long-term deal yesterday after having scored a stunning goal in the game against Atletico Madrid in Singapore. For him and quite a few others, games like this represent opportunities to make a mark, although that is rarely enough to save the game as a spectacle.

Given the fact both clubs have new managers, there is bound to be added interest in how the teams and tactics are shaping up for the new season.

Unai Emery could potentially give debuts to Lucas Torreira and Stephan Lichtsteiner after the pair joined up with the Arsenal squad at the start of the week, while Maurizio Sarri is again likely to hand new arrival Jorginho the key creative role in central midfield amid ongoing speculation over the futures of existing stars like Eden Hazard, Willian and goalkeeper Thibaut Courtois.