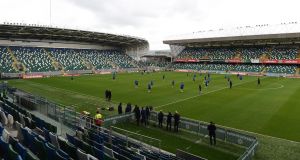 The Northern Ireland squad during a training session at the newly-developed Windsor Park on Friday ahead of Saturday’s World Cup qualifier against San Marino. Photograph: Charles McQuillan/Getty Images.

In the bookshops of Belfast is a 2016 anthology of new Northern Ireland poetry which possesses the lip-smacking title: The Future Always Makes Me So Thirsty.

As book titles go, a quencher.

The premise is that in a place where looking back has never been out of fashion, it is maybe time to recognise the here and now and that thing called the future.

The premise is that while old tensions remain, of that there is no doubt, there is also the something new. After all, we are closer to 2050 than to 1980.

This requires a different way of thinking, looking at something familiar from another perspective.

Built in 1905 by Linfield, Windsor told a major seam of the history of this city. It’s not all been good, the ground quickly becoming a literal venue where Belfast’s thriving sectarianism was played out.

Just seven years in, there was the gunfire derby between Linfield and Belfast Celtic that saw 70 hospitalised.

Those fanbases were representative of a divided city and Windsor Park – the very name – spurred loathing among the Catholic and nationalist population. It was a place associated with intimidation.

Which was understandable. On St Stephen’s Day 1948, Belfast Celtic met their violent end at Windsor, with centre-forward Jimmy Jones dragged on to the terraces after a battle of a match and stamped on by Linfield followers until his right leg broke. The fact that Jones was a Protestant was immaterial; Jones was wearing the green of Belfast Celtic.

Fast forward through some troubled decades and there was the Night in November, 1993, when Alan McLoughlin scored that goal in an atmosphere of hate.

The ground had other meanings to other fans of course, particularly Linfield’s – to them it’s home. But Irish League rivals such as Glentoran always resented the income Linfield derived from their contract with the IFA to host internationals.

Then there were the unintended consequences. Windsor’s cost in 1905 was so great they had to sell a rising star. He was a goalkeeper, 21-year-old Billy Scott, who went to Everton.

Scott stayed at Goodison Park eight years and while there recommended his younger brother Elisha, also a goalkeeper, to Liverpool.

Elisha Scott went on to become a Liverpool legend, arguably their first true Kop hero. He also went on to manage Belfast Celtic and was manager that infamous Windsor day in ’48. It all goes around, Windsor Park is draped in history.

Yet even in the grey rain of yesterday afternoon, it looked different. The drapes are off.

Revamped and restructured, the ground has also been rebranded – the “National Football Stadium at Windsor Park”. It is a subtle alteration that may be ignored in everyday conversations, but it is part of an evolving picture. The IFA have done a bit in terms of inclusion in one of the capital cities of symbolism.

Architecturally, Windsor Park is a changed place. The story of Jürgen Klinsmann arriving at the ground and saying: “Ah, East Germany, 1983!” no longer applies.

Whether that change is reflected in society is up for debate, one that Martin McGuinness and Arlene Foster could have when they attend this evening. It is the official reopening, the ministers are along.

There is a also a “Lap of Legends”, Dennis Taylor and Mary Peters among them. There is a joke that the IFA didn’t want to call it a parade. That would mean a commission, and kick-off is at 7.45pm.

This is the first Northern Ireland home match since Euro 2016, so it is also a homecoming and a celebration. San Marino being the opposition, the expectation is of a comfortable Irish victory.

“Expectation is good,” said Michael O’Neill, who first played here as a Coleraine schoolboy in the Irish League.

O’Neill also played that night in November 1993 and saw the old, tired stadium for what it was.

“Windsor had a slow death, let’s be honest,” O’Neill said with an honesty that can be fairly described as brutal.

“It’s no longer archaic, which is a positive thing. It’s fit for purpose. It’s all bright and shiny and new, and it’s got curvy bits at the end and everything, and triangles in the corner.

“Bit by bit, it was closed off, but the redevelopment has been fantastic and it’s a fresh start on the back of the team’s success at Euro 2016.

“The most important thing is: what is the atmosphere going to be like? The atmosphere will be fantastic. I think it will be a very atmospheric stadium.”

Windsor Park has always held an atmosphere. As has Belfast. Poets and players both sense it’s changing.

Across Belfast, up the Shore Road at Crusaders on Friday night, there was also change in the air. Seaview was hosting a Scottish cup game against Livingston. Not the Scottish Cup, but the Scottish Challenge Cup, or the Irn Bru Cup, as its girder sponsors would have it called.

The Scottish Football League, which overseas the competition, has invited two clubs from the Irish League and the Welsh Premier League. Uefa has sanctioned the invitation.

It is an extrapolation too far at the moment to link this to a North Atlantic League, or one of the other ideas that have been floated regarding Celtic and Rangers.

Nevertheless, were it to prove popular, where would the next invitation go? Carlisle United?

Someone in Glasgow is re-imagining things.

Crusaders’ presence in the Irish League came late. The club was small and amateur when Belfast Celtic were forced to call it a day. That left a gap. Crusaders filled it.

They had a good name – two of the Cardiff City team that beat Arsenal in the 1927 FA Cup final were transferred direct from Crusaders, Tommy Sloan and Tommy Watson – but it was hardly like-for-like with the institution that was Belfast Celtic.

To go to the Park Centre this week to see the warmly impressive Belfast Celtic museum was to be reminded of the club’s beloved status. It is on the site of a place called “Paradise” – Celtic Park – that no longer exists.

There is a signpost that reads “Paradise”, pointing one way, and “The Shrine”, pointing the other.