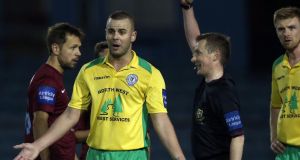 Damien McNulty of Finn Harps was sent off against Longford Town in the 20th minute of the second round FAI Cup tie at City Calling Stadium. Photograph: Inpho.

Despite playing for over 70 minutes with 10 men, First Division leaders Finn Harps dug in tenaciously to bring Longford back to Ballybofey for a replay on Monday night.

The Donegal side also had manager Ollie Horgan sent to the stand in time added on at the finish.Harps had Damien McNulty shown a straight red card on 19 minutes for a tackle on Kalem Simon.

Three minutes later, though, they were ahead. Tony McNamee put Gareth Harkin through in the inside-left channel and the striker finished emphatically, planting a crisp half-volley to the roof of the net.

Harps goalkeeper Ciarán Gallagher made a fine save from a Kevin O’Connor shot while Longford had a big shout for a penalty denied them when Harkin looked to have handled inside the area.

Longford dominated the second half, twice hitting the woodwork, but couldn’t find a way past Gallagher. David O’Sullivan’s cross was tipped onto the bar by Gallagher.

O’Connor then rattled the crossbar with a 25-yard shot on 72 minutes.

Then, two minutes into added time, Gallagher made a terrific reaction save from O’Connor’s deflected shot before Harps’ boss Horgan was then sent to the stand for disputing a booking for Ciarán Coll.

1 Connell losing touch with club championship is real tragedy of Normal People
2 Ger Loughnane and the spark that lit Clare’s hurling revolution
3 Ghosts and goalposts: The soul of street football in Dublin’s Gloucester Diamond
4 Thuram and Sancho pay tribute to George Floyd after scoring
5 Rob Howley opens up about sister’s death and gambling issues
Real news has value SUBSCRIBE
Crossword Get access to over 6,000 interactive crosswords