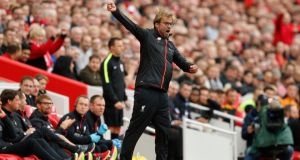 A Vauxhall Insignia estate sits in the space at Melwood where a Porsche Panamera GTS used to be. But that’s not it. Too superficial. Plus, he’s an ambassador for Vauxhall. Anfield now houses a luxurious main stand and an extra 8,500 supporters. But that’s not it either. The plans pre-date him. What about Adam Lallana, transformed from £25 million substitute to player-of-the-month nominee, or a team that lacked identity now powering their way into Premier League contention?

Evidence of progress, but far from the only change Liverpool has experienced since Jurgen Klopp beamed into Anfield 12 months ago.

It is exactly one year to the day since the 49-year-old officially accepted Fenway Sports Group’s advances to become the most significant signing of its ownership. Sixty-one matches have followed, yielding 30 victories, 17 draws and 14 defeats, two in cup finals.

His team are fourth in the table, two points behind the leaders Manchester City, having played Arsenal, Tottenham Hotspur and Chelsea away. They have produced more shots, passes, sprints and covered more distance than any other top-flight team and are joint leading scorers with 18 goals. At the corresponding stage of 2013-14, when Liverpool went closer than ever to winning the Premier League title, Brendan Rodgers’ team had scored 11.

Back then, Liverpool had Luis Suárez returning from suspension to ignite their goals tally and style of play. And therein lies a difference with Klopp’s Liverpool. The focus is no longer on individual talent such as Suárez, Steven Gerrard or Fernando Torres to inspire and overcome the financial gap that exists even among the Premier League elite. Finance is not discussed in public by the current Liverpool manager. It is about the collective. Nothing else.

Liverpool’s players and public, responding to the manager’s passion, acumen and honesty – something of a rarity among his peers – have bought into it, just as Klopp and his wife Ulla have embraced living on Merseyside. He gets the place.

“One thing he has brought in is he will make us believe we can win whether we play Barcelona or whoever,” explains Lallana. “You go out on the pitch thinking: ‘We can win this by doing this.’ You genuinely do believe him that every team is beatable.”

It has not been a flawless 12 months – the second-half collapse in the Europa League final against Sevilla still stings the former Borussia Dortmund coach – and it is not all hugs and laughter from a bloke fond of a pint in the local in Formby. Mamadou Sakho and Mario Balotelli can testify to that.

“I don’t think he ever feels it is about him,” says Liverpool’s chief executive, Ian Ayre.

“For me, the biggest change is the energy they have created and Jurgen in particular. I would describe him as an energy giver. He brings a positive energy and he expects the same from everyone else. That changes the dynamic.

“He is very easy to get on with and that resonates through to the squad, the coaching staff, the fans and even the business. The measure of his impact has been in terms of the energy and spirit of everybody at the club. I don’t think he endeavours to do that, it’s just who he is and it’s infectious.”

Revisiting Klopp’s first press conference as Liverpool manager, it is striking how many pronouncements made on that frenetic day have materialised. Once he stepped away from the TV cameras – looking every inch a man who had spent four months travelling, playing tennis and spending quality time with nearest and dearest – FSG’s man sat down with the written press and, forefinger jabbing the table, outlined his immediate aims for Liverpool.

The team would learn to “conquer the ball” and counter-press relentlessly. “That is not a proposal, it is law,” he stated. Signalling a departure from the fixation with transfer committees and net-spends, the new arrival insisted he was more concerned with developing players than how much money was available for fresh talent. Potential signings who hesitated about joining a club without Champions League football would not be pursued, a promise Klopp fulfilled this summer when withdrawing interest in Mario Gotze.

The overriding message, however, was for the entire club to create conditions for “emotional football” to exist. “It is very important that we make it all closer,” Klopp explained. “It is important they don’t think: ‘These are the good paid guys, we are the fans.’ The atmosphere in the stadium is good but nobody is really enjoying themselves.”

It is unity at Anfield, the feel around the place, that reflects his impact alongside two cup finals in seven months and an imposing start to his first full Premier League season.

As demonstrated by a furious reaction to hearing his name chanted before the final whistle had sounded on a resounding victory over Leicester City, and appeals for patience whenever a chance is missed, there is a little way to go before he will be satisfied.

More importantly, he is the first to say the same about the team. Defeat at Burnley and last Saturday’s first-half display at Swansea City back that up.

The night before being unveiled as Rodgers’ successor, Klopp celebrated signing a three-year contract worth £7 million per annum (replaced by a new six-year deal in July) with dinner at the city’s Hope Street Hotel.

Liverpool’s chief executive recalls: “Other than myself and the owners, I don’t think Jurgen had had a lot of exposure to the other people in the room but he spoke to everyone about what he had achieved at Dortmund and Mainz by bringing people together. That was what he focused on immediately – bringing the players and their families, the staff and their families, together.

“He is inclusive of everybody at the club. That is crucial to him and plays a significant role. His interaction with the fans on a matchday is part of that belief that we are all in it together. That’s why he encourages fans to sing – or tells them when to stop. It is about bringing everyone along for the journey whether he is in a room of 10 people or a stadium of 50,000.”

That inclusivity extends to Liverpool’s former players, taken by surprise when Klopp turned up unannounced at their Christmas party and spent hours listening to tales of yesteryear. Players’ partners and children were invited to a warm-weather training camp in Tenerife during March.

“I’d love to say he’s changed things by sprinkling magic dust but it really is very simple – good communication, good collaboration, good energy and good spirit,” said Ayre. “Whether you’re a steward in the tunnel at Anfield or the CEO, he’s the same with everyone.” Guardian service