Wayne Rooney promises a new chapter for England against Norway 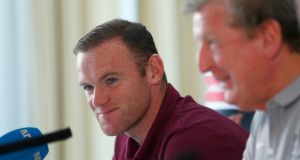 England captain Wayne Rooney: “We have to put the summer behind us. We were all disappointed.” Photograph: Eddie Keogh/Reuters.

England v Norway, Wembley, 8.0pm: Wayne Rooney has promised that England will start a new chapter when they play Norway at Wembley as they warm-up for their European Championship qualifier away to Switzerland on Monday.

The recently appointed captain and his coach admitted that there was a lingering sense of disappointment following England’s disappointing World Cup campaign, with Roy Hodgson emphasising that they needed to bring back “the feel-good factor” to restore the faith of the fans.

The disappointment of that failure in Brazil will be underlined by the plethora of empty seats, when the lowest attendance since the stadium opened in 2007 is expected. All the talk of a new beginning has clearly not appeased fans and Hodgson knows it is now up to his players to prove it.

“The players can’t wait to kick off this new campaign with a difficult game at Wembley,” Hodgson said. “I’m confident they are ready to go.”

Rooney was of the same frame of mind: “We have to put the summer behind us. We were all disappointed. We went into the tournament with high hopes and were expecting better than we produced, but we have to move on.”

The striker, who began the season with the captaincy of Manchester United, was looking forward to the first game in his new role. “I’m going to be myself,” he said. “I’m always very demanding of myself and I think when you play for your country you’ve got to do that.”

“It’s a great honour to captain my country, something I’m extremely proud of. I want to be a successful captain and for this team to be successful. Tomorrow is the start of a new chapter.”

He described Monday’s match in Basel as “vital”, adding: “It would set us up, winning there. We want to start the qualifying campaign off with a good result. It’s important to try and win the game, but not to get beat . . . we don’t want to give Switzerland the upper hand in the first game.”

Hodgson said he expected to pick an inexperienced team but for the Norway game but would not be including any debutants. “It’ll be a young team on Wednesday. The team do know, I have let them know, but I think I’ll still let people wait and see, retain an element of surprise.

“It is a team which contains some very interesting young talents, and a team with enormous potential. This will be the first chance to show that.”

“This will be a good time to get two good results, two good performances, and to show everyone my faith in the team is justified.”

Hodgson was encouraged also by Danny Welbeck’s €20 million move to Arsenal, feeling that the forward would get more game time at the Emirates. “When you’re a player of his calibre and you find yourself at United, where competition for places means you don’t always get the starts you like, it’s good for him to now get the chance of more starts and playing time.

“It’s not easy for players who don’t get a lot of playing time for their clubs, or subs playing only a small part in games, to come away and play 90 minutes for England. I’m pleased for him. I select him all the time, so I think that Arsenal have signed a good player. I cannot deny the more they play and the more experience they get, especially in the Champions League, the better it is for me.” Guardian Service