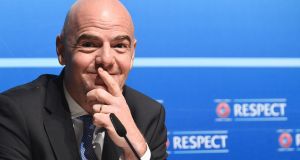 Uefa general secretary Gianni Infantino says he is “very confident” of being elected president of Fifa after receiving the unanimous backing of the European body’s Executive Committee at its meeting in Nyon yesterday.

It was a busy day for the committee’s members who also formally agreed to the use of goal-line technology at this summer’s European Championships and next season’s Champions League, where it will be mandatory from the play-off round, group stages and subsequent knockout ties.

Uefa will also retain additional referee’s assistants to help with critical decisions around the penalty area; at least for the moment.

Michel Platini had long opposed the use of goal-line technology, arguing that it would, over time, lead to the introduction of video replays as a refereeing aid, which, he contended, would have a negative impact on the flow of games.

He appears to have been right on that score, with the game’s rule making body, the International Football Association Board, having authorised trials of just such a move at its most recent meeting in London a couple of weeks ago.

Platini was not able to attend yesterday’s ExCo meeting as he is currently banned from football but in his absence the committee members decided to delay any election for the Uefa presidency until he successfully appeals the ban or exhausts the appeals process. The decision could pave the way for the French man’s return or, should his suspension be upheld, provide a fallback option for Infantino should he fail to win the Fifa presidency.

Uefa will spend €500,000 supporting the candidacy of Infantino, whose hopes may have been boosted by the news that the Bahrain Institute for Rights and Democracy has written to leading Fifa sponsors to raise concerns about the part played by Asian confederation president Sheikh Salman bin Ebrahim al-Khalifa in the suppression by the country’s rulers of a pro-democracy movement.

Sheikh Salman is seen by many to be the frontrunner to succeed Sepp Blatter with Jordan’s Prince Ali bin al-Hussein regarded as the other major contender.

Uefa has, meanwhile, confirmed that debit cards can be used to make payments for Euro2016 tickets.

A spokesman said: “Even though the ticketing portal mentions that only credit cards are valid, debit cards work as well, provided there are sufficient funds on it. We have successfully used exactly the same principle during the general ticket sales phase in June/July 2015 without any issues.”