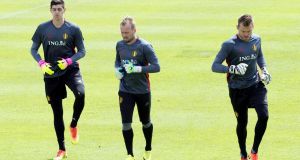 Chelsea and Belgium goalkeeper Thibaut Courtois was involved in a furious “altercation” with his national team manager Marc Wilmots following his team’s defeat to Italy on Monday.

Wilmots has reacted in prickly fashion to a flood of criticism after the 2-0 loss to Italy called into question his team’s credentials at Euro 2016. Including comments from his goalkeeper who questioned his team’s tactics.

According to reports the pair almost came to blows when discussing the post-match comments on the plane back to their training base. With Courtois’ reference to the loss as “a tactical defeat” particularly irking his manager.

A witness to the incident described the clash to BeIN Sports as a “lively discussion”.

“The press have been praising me for four years and to now tear me down after a single game is easy, right? And now suddenly I’m a bad coach?” Wilmonts told reporters on Tuesday.

“I have to laugh at some of the criticism at our tactics. Having looked back at the game we deserved at least a draw. We had a couple of enormous chances to bring it back to 1-1.

“We knew we wouldn’t get too many opportunities but after the first goal they sat back and if you don’t score yourself then it becomes difficult,” he added as Belgium completed a light training session at their base at Le Haillan following their Group E defeat in Lyon.

There was a barrage of criticism from media, pundits and fans in Belgium after an unconvincing performance.

Wilmots said he thought Courtois’s comment was made “in the heat of battle”.

“Logically he was frustrated after letting in two goals,” said Wilmots. “Courtois said it was not aimed at me.”

Wilmots also said midfielder Radja Nainggolan had apologised after showing his frustrations after being substituted as Belgium chased the game.

On Saturday Belgium continue their campaign against Ireland. Their second choice goalkeeper is Liverpool’s Simon Mignolet, should Wilmonts consequently decide to drop his number one.

1 Sligo meeting abandoned after four races due to safety concerns
2 A new putter for Tiger Woods is something worth noting
3 The game they loved so well: How cricket united Hume, McGuinness and McCann
4 Nicola Sturgeon ‘furious’ as players’ pub trip sees Aberdeen game postponed
5 Brain as well as brawn on Sexton’s lockdown menu
Real news has value SUBSCRIBE
Crossword Get access to over 6,000 interactive crosswords