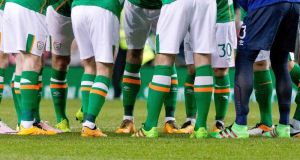 The Republic of Ireland will attempt to bounce back from the defeat to Germany when they take on England in the quarter-finals.

Despite being thumped by table-toppers Germany in Wednesday’s concluding European U-17 Championship group game in Croatia, the Republic of Ireland join their victors in this weekend’s quarter-finals thanks to a result elsewhere.

Only a 1-0 victory for Bosnia-Herzegovina over Serbia in the other final Group C fixture would have sufficed for Colin O’Brien’s Ireland to sneak a top-two finish if they lost.

Armin Imamovic waited until the last minute to provide Ireland with that favour as his winner denied their Balkans rivals progression to the last-eight.

It was a hollow ‘victory’ though for Ireland, as their players left the Rijeka pitch dejected at the lesson they’d been handed by the Germans only for wry smiles to break out upon hearing of the late developments from five miles away in Kostrena.

Ireland were the beneficiaries of Uefa’s convoluted qualification criteria after they finished the round-robin group deadlocked with Serbia and Bosnians on three points.

In such scenarios, the defeats by all against Germany are excluded for the purposes of assessment, leaving three teams with a win apiece and level on goal difference.

However, due to Ireland defeating Bosnia 2-1 on Sunday, they had scored the most goals and were therefore granted the berth on Saturday against England .

“We had a tough day today at the office and were second best for a lot of it,” admitted O’Brien afterwards. “When you play a team like Germany and you don’t do the right things around your own box, they are clinical and they showed that today.

“We expected Germany to dominate, but we did not expect such a big defeat.

“However, it was about keeping it alive for the last match. With Bosnia winning, it has put us through to the quarter-final stage, the furthest we’ve got in 20 years so it’s a good day from that perspective.”

Ireland will need to improve greatly if they’re to compete with the ‘Auld Enemy’.

Were they to be eliminated at that quarter-final stage, Ireland could still secure a place in the Under-17 World Cup held in India later this year depending on the margin of their defeat. Two of the beaten quarter-finalists with the closest result advance to a play-off for the firth ticket to India.

One of the stars of the tournament, striker Jann-Fiete Arp, was given too much room to pick his spot for Germany’s second with 15 minutes played before Ireland captain Lee O’Connor suffered the misfortune or sending his attempted clearance into his own net six minutes later.

Strikers Aaron Connolly and Adam Idah were starved of service up front, leaving Ireland reliant on the odd set-piece they fashioned to mount a response, but they went four behind moments into the second half as Arp finished Abouchabaka’s cross.