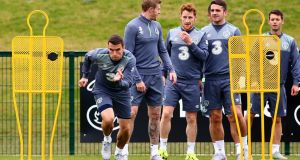 Martin O’Neill believes there is a renewed sense of confidence in the Ireland squad ahead of this evening’s crucial qualifying game against Georgia, but the Republic of Ireland manager fears people are getting carried away with the fact that his side rather than Scotland currently occupy third place in a tightly-contested group.

“We might be all getting a little bit ahead of ourselves. I heard something about it being ours to lose now, but we’ve got games against Germany and Poland, and before them we’ve got this tough game tomorrow night against a resurgent Georgia side who will come here with plenty of confidence after beating Scotland.

“Even if Scotland had won the match we were still in it, but now we have got to try to take advantage of it [their defeat].

“ I can’t look too far ahead, though. We can’t look at Germany; we have got to try to win this game, and so our total focus is on that.”

Seamus Coleman could feature, according to the manager, but remains a doubt due the tight hamstring that kept him out on Friday.

“Seamus, thankfully, might be back in contention again,” said O’Neill. “He did a little bit this morning, and we’ll see how he is tomorrow.”

Concern over the 26-year-old’s fitness will have been eased somewhat by Cyrus Christie’s performance in Faro but the manager made it clear that he is anxious to have the more experienced player back for a game that promises to present a greater challenge.

He says he will look at both the formation and starting lineup before naming his side. His record suggests there will be at least another change or two, with Robbie Keane’s place potentially up for grabs despite his goals against Gibraltar.

Keane’s record against tonight’s opponents – six goals in all and at least one on each of the previous three occasions when they have visited Dublin – is impressive, but the veteran striker still sounded yesterday a little like a man hinting that he might be about to make way.

“But for me the most important thing is the team; it’s not about Robbie Keane, it’s not about individual awards or scoring goals... it’s about the team qualifying for the Euros.”

If Keane is left out then Shane Long may well start – with O’Neill suggesting yesterday that the goal he got at the weekend might be just the thing he required to help him make an impact in a game like this.

“Shane has the ability to do things that other players can’t,” says the manager. “He has a bit of pace, he can get in behind teams, especially when teams are pressing up. At home [in Dublin] when teams are sitting in and there’s not much room in there; that might be something we’d look at.”

The player’s confidence is a factor, he suggests, and that can be dictated by his club fortunes. “If you’ve not started for a few games, naturally you’re a bit down, but Shane came on and scored, and it was great to see him make that impact.”

Scotland’s defeat on Friday will serve as a warning that under their new coach Kakhaber Tskhadadze, Georgia have the potential to cause opponents real problems. However O’Neill has the benefit of being able to study the Tbilisi encounter as he seeks to ensure this one follows a different pattern.

The result, of course, provided a measure of vindication for O’Neill and Roy Keane, both of whom had insisted through the summer that there was a twist or turn left in this qualifying campaign. The challenge now is to ensure that it all goes strictly to plan from here on in.

There might be a little more confidence about tonight if both Coleman and Aiden McGeady were fully fit, but the Ireland squad is sufficiently strong to take all three points if things go to plan.

Mchedidze is likely to prove a handful again but the visitors are weakened by the injury to Spartak Moscow midfielder Jano Ananidze who has not travelled and amongst “three or four” other injury concerns. First choice goalkeeper Giorgi Loria may not have recovered sufficiently himself to feature.

O’Neill’s men simply must win. Having restored Ireland’s sense of hope of qualifying for France next summer, it would be unforgiveable if the Georgians were to be allowed to all but extinguish them again.