O’Neill spoiled for choice as he narrows down the squad 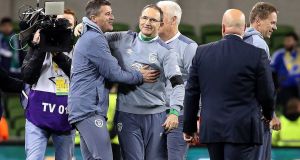 Republic of Ireland’s coach Martin O’Neill by Roy Keane after the play-off win over Bosnia Herzegovina at the Aviva Stadium. Photo:Getty Images

He says it’s best not to think too far ahead but Roy Keane admits that he was still up at 6.30am yesterday chatting about what the final list of 23 players for the European Championships in France might look like. The hope, he suggested, is that one or two new faces will add to Martin O’Neill’s options and the Corkman says that some of those who have been around a while could do with taking action if they are safeguard their seats on the plane.

“You would always hope [that some new players will force their way into the reckoning],” he said. “That is why it will be good, with a couple of friendlies coming up, there will a chance for [Alan] Judge to get involved, and [Harry] Arter. These are boys we still haven’t seen enough of. But that is the nature of football. You are always hoping one or two will surprise you and step up to the plate in international football and make a name for themselves.

“Obviously narrowing it down to 23 players will be hard but you always say to the players that are not playing – Aiden McGeady, Gibbo [Darron Gibson], Pearcey [Alex Pearce] – that it is important to go and get games under their belts because it will be very difficult for the manager to go and pick lads who may not have kicked a ball for six months.

“I always think the players pick the team and the squad. If lads are out there performing there is a good chance they will be travelling; if not then it will be difficult.”

O’Neill will doubtless be happy to have an on-form Gibson in his squad but he clearly sees McGeady as a key member of his starting line-up if the 29-year-old had the match fitness that comes with regular first team football. While the manager may be reluctant to spell things out in public, O’Neill is likely to have encouraged the pair privately to consider how they might best progress the situation over the second half of the club campaign. That might involve a loan or, one suspects in the winger’s case, moving on entirely from Goodison Park.

One man who looks set to have a very big part to play in France is Jon Walters. His goals on Monday rounded off a superb campaign that has made him a favourite of the manager.

Keane previously managed the striker at Ipswich where the pair fell out when Walters decided he wanted to move on but the Corkman insists that the reason he was so anxious to retain the player five years ago was because he was so sure that he had a great deal more improvement left in him.

“There was never any doubt about Jon. That was why I was trying hard to keep him. There is no surprise about Jon Walters. He is a big character, a warrior and we could do with a few more Jon Walters’.”

Asked if there pair’s relationship really had hit the rocks back then, Keane acknowledged that, “There was a falling out,” before adding with a big grin, “but we are friends again now.”

Keane’s own future is somewhat up for the grabs now with the 44-year-old clear that he still wants to make a return to club management although he insists that he also wants to stick around for the finals in France if possible.

It is hard to know if his assistant might feel that is an obvious time to break away and resume his own career but his marketability is bound to have improved with his involvement in the team’s qualification and he said yesterday that he has declined a number of approaches.

“Stuff has come up,” he said, “but I’ve always been very focused on the job. We’ll have a look at that again in the next few months.”

In the meantime, his love of the close-hand involvement with games is obvious from the extent to which he gets caught up in things watching from the sidelines.

The sense of relief at Ireland having secured the required result was still apparent yesterday when it was suggested to him at one point that the win had seemed a comfortable one as opposed to the team having scraped over the line.

“It felt like a scrape to us on the sideline,” he said with a hint of exasperation. “People said to me afterwards that it was almost comfortable [and I thought] ‘what game were you watching?’”

1 Monica Seles: The warrior queen who could have been the best ever
2 IRFU in line for €75m windfall as CVC acquire 14.5% Six Nations stake
3 Séamus Heffernan given 22-day whip ban by Chantilly stewards
4 Eamon O’Shea: We spent quite a bit of time talking about older people rather than to them
5 Bryson DeChambeau motors home with 65 to win in Detroit
Real news has value SUBSCRIBE
Crossword Get access to over 6,000 interactive crosswords