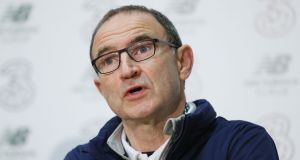 Derby County manager Gary Rowett has emerged as the first big winner of the situation at Stoke City with the 43-year-old signing a new long-term deal at the English League Championship club.

The FAI continues to regard O’Neill as their man and the suggestion is that they expect him to be in Switzerland for the Nations League draw in two weeks’ time. But the 65-year-old has not signed the new contract that he said was agreed in principle two months ago and so nobody seems entirely sure that the northerner is not contemplating a possible return to the Premier League.

Whether Stoke are really serious about handing him the opportunity is not yet clear but they do seem keen to have him as an option with the field having dwindled by one on Tuesday when Rowett signed his new deal.

The former Birmingham City boss only took over at Derby last March but has done well, with the club currently second in the Championship table behind runaway leaders Wolves.

Derby were clearly keen to keep him but his original contract is understood to have contained a clause allowing him to leave if somebody was willing to pay around €1.7 million in compensation, something that would have been easily within Stoke’s gift if they were serious about poaching him. So his current employers have moved to secure his position with a new three-and-a-half year deal.

There are plenty of other contenders for the Stoke job although one of the more obvious ones, former West Ham boss Slaven Bilic, is reported to have made it known that he would only be interested in the summer as he believes he needs a longer break from the game.

That might actually work in O’Neill’s favour if he were interested in the job short term, presumably on the basis that the FAI allowed him to perform both roles for the next few months although it is unclear whether John Delaney would entertain the idea or, for that matter, whether O’Neill might only be attracted by the prospect of a permanent switch.

Bournemouth, meanwhile, have denied having received any bid for Ireland midfielder Harry Arter. The 27-year-old is reported to have been the subject of a €5.6 million offer from West Ham but a club spokesman club told the Bournemouth Echo that no offer had been received.

1 Owen Doyle: Ireland suffered from officiating of the breakdown
2 Gerry Thornley: Ireland don’t want to box themselves into a corner
3 No further players to be called up to Ireland squad to face Georgia
4 Thomas Galligan and Cavan raring to meet Dublin in Croke Park
5 Kevin McStay: Maybe a knockout All-Ireland Championship is the long-term solution?
Real news has value SUBSCRIBE
Crossword Get access to over 6,000 interactive crosswords