Martin O’Neill insists the buck stops with him

‘Decisions will fall to me .... but I wouldn’t be expecting Roy to be playing a passive role’ 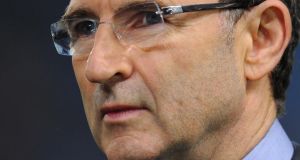 Martin O’Neill: ‘They ask me if I have regained my enthusiasm for the task after my experience at Sunderland. The answer is I never lost my enthusiasm.’ Photograph: Mike Hewitt/Getty Images

Do not underestimate the fire that still burns in Martin O’Neill’s belly. Roy Keane might be the “iconic figure in world football, never mind Irish football”, according to the new Republic of Ireland manager, but there is no doubt where the buck stops.

They have been cast as the odd couple since O’Neill’s unsurprising appointment as Giovanni Trapattoni’s successor was followed by his unlikely selection of Keane as assistant, but the Ulsterman will take responsibility for the team’s success or failure over the course of the campaign for France 2016.

“I’m the manager,” O’Neill says. “Eventually the decisions will fall to me. That doesn’t mean I can’t rely on Roy’s opinion but this was how I worked with John Robertson for years and years [at Leicester City, Celtic and Aston Villa].

“I would have decisions to make and John would have an input but, if you’re the manager, you live and die by those decisions. Having said that, I wouldn’t be expecting Roy to be playing a passive role.”

Will there be room for two such combustible characters in one dugout? It is one thing sharing a touchline for ITV to exchange a few words on a Champions League game, quite another to resurrect the fortunes of a side that has plummeted to 60th in the Fifa rankings after a dispiriting World Cup qualifying campaign.

“That does not worry me one jot,” O’Neill said on Friday, on the eve of his first meeting with the Irish press.

“Roy Keane is an iconic figure in world football, never mind the Republic of Ireland, so if you’re talking about egos, it doesn’t bother me. Roy’s appointment has stirred a lot of people, which is great, but right from the off I’d be well aware of that. That’s not a problem. Roy is a very strong personality and very well known and people will want to hear his views. Far from shying away from that, I welcome it.”

Keane’s difficult relationship with Irish football underlines his image as the firebrand of the new Republic management team. Yet it is not so long ago that O’Neill’s touchline antics had him down as the Premier League’s most emotionally charged manager. Are they so different now? Or is there something of his younger self that the 61-year-old sees in his fellow former Sunderland manager? “Roy has that reputation for more fire than ice and it’s probably me being that much older and supposedly a bit wiser that makes people reckon I’ll be the calm old head,” O’Neill says.

“It’s interesting that people take that fire out of their image of me when it’s been part of my make-up through a whole managerial career. They ask me if I have regained my enthusiasm for the task after my experience at Sunderland. The answer is I never lost my enthusiasm.”

O’Neill’s fire was not doused by his 15-month reign at the Stadium of Light but he was burned by it. “In the whole debacle, it gets forgotten that when I first joined, they were third from bottom with 11 points from 14 games,” he says. “Because I won a number of games to start with, everyone, including the owner (Ellis Short), started to think we had cracked it.

“ (Paolo) Di Canio was allowed to bring in 15 new players at a time and then didn’t last six games into this season. Since I left (in March), Sunderland have won three Premier League games. Di Canio, coming in, disparaging about everything, won two of 11 games. They’ve taken 12 points from a possible 51 since my time.

“I wouldn’t have minded the opportunity to be signing 15 players. Nothing is certain in this game but my record in management over 20 years would suggest that we would have got the five points needed to stay up.”

O’Neill has a history of improving underachievers and loves the challenge of inspiring an underdog to regain its bite. In his playing days, as Northern Ireland captain, he led Northern Ireland to the quarter-finals of the 1982 World Cup and, under Brian Clough - who also managed Keane - he helped Nottingham Forest from second-tier also-rans to European champions.

He now has to contend with the best part of a year without competitive games, Ireland’s failure to qualify for Brazil 2014 having paved the way for his re-emergence, but he is relishing finding his feet this coming week with friendlies against Latvia and Poland. His contract lasts as long as Ireland’s interest in Euro 2016.

“Qualification is what I will be gauging my time there on,” he says. “A number of very good managers have done well to lead Ireland to tournaments – Jack Charlton, Mick McCarthy, Giovanni Trapattoni – and we will do our utmost to qualify. That’s what we’ll be judged on. There’s a bit of disappointment lingering around from the end of the last tournament, so maybe it’s about trying to galvanise people.”