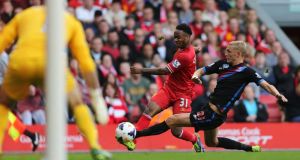 Liverpool’s Raheem Sterling (centre) has been called up by England ahead of the meeting with Poland on Saturday. Photograph: Peter Byrne/PA Wire

Liverpool wide-man Raheem Sterling has been called into the England squad for Tuesday’s all-important World Cup qualifier with Poland at Wembley.

Manchester United midfielder Tom Cleverley was forced to return to his club for treatment on a calf injury sustained in training that is set to keep him on the sidelines for up to three weeks.

Then, during the 4-1 win over Montenegro, full-back Kyle Walker picked up a caution which means he is suspended for the Poland encounter where England must win to book automatic qualification to next summer’s Finals in Brazil.

Either Phil Jones or Chris Smalling is likely to replace Walker.

However, Hodgson evidently felt he was light on bodies and has elected to draft in Sterling, part of Gareth Southgate’s Under-21 side that defeated San Marino on Thursday.

Jamaica-born Sterling became the fifth-youngest player in England history when he started the friendly defeat in Sweden last November.

The 18-year-old has not featured for his country since, although he was part of the squad that defeated Moldova and drew in Ukraine last month.

England head into the final set of fixtures heading Group H by a point.

However, as second-placed Ukraine face a less than daunting away game against San Marino, Hodgson knows victory is essential to avoid the hazardous play-offs.

1 Leinster qualify as top seeds with Benetton win
2 St Michael’s conveyor belt showing no signs of slowing down
3 Ulster huff and puff their way past Bath and into the quarter-finals
4 Munster mood will be determined before kick-off
5 Welcome to Iten in Kenya – home of champions and cheats
Real news has value SUBSCRIBE
Crossword Get access to over 6,000 interactive crosswords