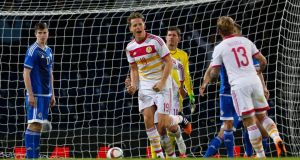 In the grand catalogue of Gordon Strachan’s steady transformation of Scotland a narrow win over Northern Ireland will hardly register, but it was never meant to.

The Scotland manager’s insistence beforehand that this match would act as preparation for Sunday’s Euro 2016 qualifier against Gibraltar following a four-month break was prescient because in truth little else could be taken from this performance.

“I felt it was important to win tonight, just to make us feel good about ourselves before Sunday‚” Strachan said afterwards. “We started well, particularly for a friendly match, then it dropped away. They made it hard for us, and there were one or two things I would like to do a bit better, but a clean sheet and a win is a good thing.”

Northern Ireland, too, have a crunch Euro 2016 qualifier on Sunday, with Michael O’Neill’s team second in group F facing fourth-placed Finland . And for the most part the former Newcastle and Hibernian midfielder was satisfied with his side’s display, even if the decision to substitute much of his defensive line proved to be a factor in Christophe Berra’s winning goal from a corner.

“In a normal game I wouldn’t have made those changes,” O’Neill explained. “We felt there were players who deserved an appearance, so under normal circumstances we wouldn’t have lost that goal.”

Much of the Scottish pre-match build-up had focused on who would take the goalkeeper’s shirt, with Craig Gordon, Allan McGregor and David Marshall all boasting decent claims, yet there was not to be much attention on the Scotland No1 – Gordon – once play started. The home side dominated from the first whistle in a 20-minute spell that looked like a dry run at probing a packed defensive line – like the one Scotland will expect to face on Sunday. “It took us a while to settle,” O’Neill said.

Bournemouth’s Matt Ritchie was handed a debut on the right side of the Scotland midfield, eventually making an impression with the delivery for Berra’s headed goal after a shaky start. But it was down the left where the home side overran their opponents as Ikechi Anya – the Watford winger who seems to reserve his best form for international duty – threatened, forcing Michael McGovern to tip round his near post with one effort, and shooting wide of the same post after 22 minutes.

Berra’s winner five minutes from time gave Strachan the win he wanted, but this was not the friendly pick-me-up he coloured it as. Ordinarily Scotland would need to be better for a Euro 2016 qualifier, but that might not be the case against Gibraltar. Nonetheless, he has plenty to ponder. “I’ve got a system in mind for Sunday,” Strachan added. “It’s just about putting the right players into that system.”