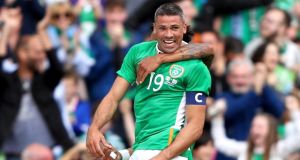 Jon Walters scored a peach and then missed a golden opportunity in Ireland’s friendly win over Uruguay. Photograph: Ian Walton/Getty

The year before that there was a 5-1 defeat to Portugal in the US, and the year before that a 2-0 defeat to Spain, also on the far side of the Atlantic. They are occasions to make you wonder why we can’t just play the competitive matches and let the players go on holiday.

And yet every six or seven years there is a June friendly that turns out to be vaguely worthwhile. There was the 2-0 victory over Italy in Liege in 2011, there was a 1-0 victory over Holland in Amsterdam in 2004, when Dutch TV pundit Louis van Gaal hailed Andy Reid as the best player on the pitch. And there was the 1996 US Cup, memorable because Mick McCarthy, Niall Quinn and Liam Daish all managed to get themselves sent off against Mexico even though only one of them was actually playing in the game.

Classic of the genre

To these classics of the June friendly genre we can add Ireland’s 3-1 win over Uruguay. Unlike many low-tempo friendlies, this one at least provided a few pointers for the manager, and a couple of terrific goals for the 27,000 fans to savour

How close was he? Two yards?

Man of the match Harry Arter showed that he is Ireland’s best organising midfield player, ahead of Glenn Whelan or James McCarthy. “I thought he made a significant contribution here,” Martin O’Neill said. Keiren Westwood showed he is probably a better goalkeeper than Darren Randolph. James McClean proved again that he is Ireland’s most dangerous counter-attacking weapon. And captain Jon Walters illustrated the extent to which football is a game of random chance. One minute you’re sweeping a glorious shot over the goalkeeper and into the top corner, the next you’re missing an open goal from point blank range.

“You’d have thought it might be the other way around,” O’Neill said. “Great goal, delighted for John, captain for the day as well. And then proceeds to hit the bar. How close was he? Two yards? He’s not the only one who’s missed from that distance."

It was a bad day for Randolph, who nearly conceded a very silly goal early on by playing a square ball across his own goal that the stretching Edinson Cavani missed by inches.

Cavani left the field a couple of minutes later with an apparent muscle injury: maybe he had ruptured himself stretching for Randolph’s teaser. The other star in this Luis Suarez-less Uruguay team was Jose Gimenez, the young Atletico Madrid centre-back. Within a few minutes of Ireland taking the lead through Walters, Gimenez had equalised with a classically Atletico goal, beating Randolph to a free kick and sending a looping header bouncing into the net. The Irish goalkeeper’s ill-considered rush from his line had not taken him anywhere close to the ball. Westwood replaced Randolph at half-time, the highlight of his game was a superb diving save to claw away a goalbound header.

Based on these 45-minute displays, Westwood looks the more in-form goalkeeper ahead of next week, but O’Neill refused to be drawn on whether he had seen enough to make a change. “I’ve got a lot of time for both goalkeepers,” he said.

“From the moment that Darren’s come in, he hasn’t done a great deal wrong. Westwood has been waiting patiently in the wings. I know Keiren myself. Very talented goalkeeper, great save today. It’s very nice to have two talented goalkeepers.”

Ireland put together some decent moves in the first half, particularly in the build-up to Walters’s two-yard shot against the bar, which came from a whipped ball across the box by Cyrus Christie to Robbie Brady, whose expert cut-back created a chance that looked unmissable.

Christie broke the deadlock in the second half when he cut inside past Sebastian Coates and hit a left-footed shot that looked too weak to find the net, but somehow surprised Esteban Conde and rolled in - not unlike the goal he scored for Ireland against Gibraltar.

“Cyrus has always done well for us, really,” O’Neill said. “He’s unlucky that someone so brilliant as Séamus Coleman is in front of him. He took himself off as well to get physically fit after the season. Great credit to him, I thought he was excellent today.”

The third goal was the pick of the bunch. Like the very similar goal McClean scored in Vienna, it was a breakaway move worthy of Real Madrid. Wes Hoolahan intercepted a slack Uruguayan pass in midfield and found Daryl Murphy, who was 10 yards inside the Irish half. The big man turned and played a Modric-like through-ball to the left channel, into the path of the galloping McClean.

Gimenez ran and slid in with a tackle designed to take ball or man, but McClean rode the challenge, dribbled into the box, and smashed a terrific shot past Conde into the far corner, where it smacked satisfyingly into the net.

Maybe the image of McClean powering away from his defence was in the head of Uruguay coach Oscar Tabarez, referred to as “Maestro” by the Uruguayan journalists, when he delivered the following assessment of Ireland after the game: “Very intense team, in terms of athletics, a very strong team, very fast. Overall, a very very strong team. Very focused. Very well-organised. And that’s the goal of football.”

“If I’m not overboard about the Mexico defeat, I won’t be wallowing in this,” was O’Neill’s summary. “It’s nice to win, but everything is about preparation mentally and physically for the game next Sunday.”