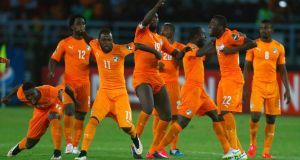 Could there have been a more unlikely hero than Boubacar Barry? He was the reserve keeper, the relic of the past, the clownish figure so often blamed for Ivorian failure. Elevated to play in the final only because Sylvain Gbohouo had suffered a thigh strain, he seized his opportunity in a ridiculous, hilarious, remarkable way, saving two penalties and then scoring the decisive kick in the shootout himself.

For Ivory Coast this was the end of a 22-year wait that in the past nine years has become particularly acute. This was their third final in that time and, when Wilfried Bony and Junior Tallo failed with their first two penalties, it seemed like they were facing a third defeat. Gervinho, who missed the decisive kick three years ago, but had been subbed off before the end, sat on a chair by the dugout throughout the shootout, facing away from the action. But never doubt Hervé Renard and the lucky white shirt that is now unbeaten in 17 Cup of Nations games and that has made him the first manager to lift the trophy with two different sides.

It won’t matter to them in their glee, but it should matter to CAF and African football, that the final was played out before a disappointing crowd. The 2,000 or so orange-shirted members of the official Ivorian fan club were there, as they have been throughout the tournament, swaying along to the anthem and brandishing their various orange inflatables, and there were a few hundred Ghanaians, understandably keeping a lower profile after the events at the semi-final in Malabo on Thursday.

Local fans, though, seem to have lost interest in the tournament after their own team went out in that semi-final: only a few hundred turned out at the third-place play-off on Saturday, while even the free distribution of tickets outside the ground failed to persuade more than about 12,000 that it was worth braving the rain and the heightened security to attend the game. State television didn’t even screen the game live.

Paratroopers with machine guns and soldiers with AK47s were deployed around the stadium, as though that was in any way likely to be an appropriate or effective response against people throwing water bottles. There was also a return for the helicopter, once owned by the Suffolk Constabulary, that had dispersed bottle-throwing fans in Malabo, although this time it thankfully did nothing more than perform some precautionary laps of the stadium.

There were, though, two banners insisting that “Equatorial Guinea rejects and condemns violence”, presumably a response to the ruling party’s demand for its members to redouble their vigilance against the “eternal enemies of peace” whom it had blamed for the trouble at the semi-final. For those brought in to perform the pre-closing ceremony entertainment, it must have been a thoroughly dispiriting experience, gyrating, cavorting and singing at banks of empty seats.

On a night that was about their final consecration after a decade of near misses, it was perhaps appropriate that there were starts for all four of the players who survive from the squad that lost in their final defeat in Egypt in 2006. The Tourés and Siaka Tiéné have been regulars through the tournament, but Barry was a late and worrying addition. No matter; in this script he was the hero.

Barry has never been the most confident of figures, his habit of leaving his shirt untucked and his mournful face adding to a reputation for haplessness so that at seems at times he’s what Buster Keaton would have been if he had been a goalkeeper. Before half-time he had fumbled a cross and sliced a clearance, while almost his first act after a cagey opening was to find his feet rooted and his body desperately flailing backwards as Christian Atsu looped a shot against the right-hand upright.

Dede Ayew, whose father, Abedi Pele, was suspended when these two sides met in the Cup of Nations final in 1992, hit the post 10 minutes later, running on to a clever pass from Baba Rahman and then slicing his effort, which may have been intended as a cross, against the outside of the upright.

Dede’s brother, Jordan, missed out, as Asamoah Gyan was declared fit after his pelvic injury. He lacked sharpness, though, struggled to impose himself on the Ivorian back three and should have been sent off before half-time after stamping on Eric Bailly. Ivory Coast, also, were lucky to get to the break with 11 men after Serey Die, already cautioned for thrusting his studs into the midriff of Wakaso Mubarak, was extremely fortunate to escape a second yellow for a foul on Atsu.

The ill temper was not helped by the sense of inevitable stalement.

Both these sides were looking to end long droughts and that perhaps added to the anxiety, and both prefer to play on the break, the result being a grim, turgid game that seemed destined very early for a goalless draw, just as Ivory Coast’s three previous finals have all ended 0-0 and gone to penalties. A familiar story had a most unexpected ending.
Guardian Service

1 Georgia and Fiji in line to join Six Nations sides in eight-team tournament
2 Sport rallies around David McGoldrick following online racial abuse
3 Malachy Clerkin: Sleep well Jack, you made us all happy
4 Ken Early: Another Mourinho masterclass in going through the motions
5 Stephen Scullion: ‘Athletes will do long-term serious damage chasing those results’
Real news has value SUBSCRIBE
Crossword Get access to over 6,000 interactive crosswords