FAI accused of heavy handedness towards Ireland fans in Serbia 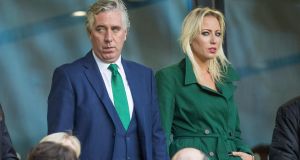 The FAI has again been accused of heavy handedness in response to dissent, with its officials said to have stopped and searched some travelling fans in order to prevent public displays of dissatisfaction with its chief executive John Delaney at Ireland’s World Cup qualifier in Belgrade on Monday night.

Supporters complained yesterday of having been stopped as they sought to enter the Red Star Stadium and searched by the association’s head of security, Joe McGlue, who was apparently attempting to prevent the unfurling inside the ground of a banner which mocked Delaney over his description of the League of Ireland as the Irish game’s “problem child”.

At least two Irish fans, Tommy Shields and Zeno Kelly, were stopped on the way into the ground by McGlue and members of the Serbian FA’s security and searched or questioned.

The intervention, which yielded nothing as there was apparently no attempt made to bring the banner into the ground, was the latest manifestation of an ongoing policy of preventing public demonstrations of frustration with Delaney’s leadership particularly by fans associated with the YBIG supporters’ group who have become vociferous critics of the association’s leading administrator.

The sections are set aside for some of the most loyal followers of the team in happier times but as relations with Delaney soured over the last few years and they sought to demonstrate their disapproval, there have been repeated complaints of long delays caused by searches as security staff seek to prevent anything that might prove embarrassing to him being brought into the ground.

In June of last year, a number of the fans clubbed together to pay for a banner bearing the slogan “Delaney Out” to be flown over Lansdowne Road on the day of the European Championship qualifier against Scotland but the company hired to fly the plane pulling the banner pulled out on the morning of the game when, they said, they realised that the move would be contentious.

The FAI last night declined to comment on the Monday night’s events.