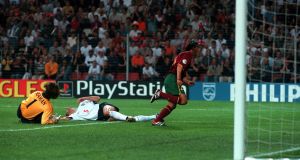 Two years after David Beckham’s red card at the 1998 World Cup and the subsequent death threats and burning effigies, it was time for England to once again crash out of a major tournament early.

It would be four years after they had first planned to but nobody was too fussed about that.

England had been dealt a tough group stage draw for the showdown in Belgium and Holland in the form of Romania, Germany and Portugal.

On paper Romania were dismissed. This would be a battle between the English, the Germans and the Portuguese.

Reminder: football is not played on paper.

Romania battled out a brave 1-1 draw with Germany in their opening match, heaping even more importance on the clash of England and Portugal.

The two sides met at the Philips Stadoin in Eindhoven and Keegan’s charges got off to the perfect start when Paul Scholes headed home after just three minutes.

Less than 20 minutes later Steve McManaman side-footed into the net and England were 2-0 up and in dreamland.

A reality check was in store and Luis Figo was the man to administer it just four minutes later.

Picking the ball up inside his own half the then Barcelona winger surged forward through a virtually non-existent English midfield.

Not until he was 30 yards from goal was he closed down and by then it was too late.

With his right foot he unleashed a thunderbolt of a shot which left David Seaman rooted to the spot and crashed into the top right corner of the net.

The comeback was on.

Portgual were now the team with all the momentum and it was only a matter of time before an equaliser came along.

Joao Pinto was the man to do just that and the sides went into the break on level terms.

After surrendering a two goal lead England were rocked. After coming back from a two goal defecit Portugal were flying. There was only going to be one winner.

Just short of the hour mark that winning goal came. A low, skittering cross from Rui Costa found Nuno Gomes in acres of space behind Tony Adams. With time to compose himself he hammered home and England were beaten.

Keegan’s team managed to recover somewhat by beating Germany in their next match thanks to an Alan Shearer goal but then it all unravelled against Romania when they were again on the wrong side of a 3-2 scoreline and sent home early.