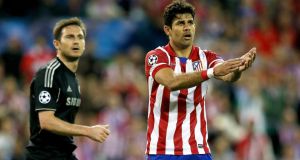 Diego Costa has completed a medical examination at Chelsea and is poised to seal his £32m (€40m) transfer from Atletico Madrid. The Brazil-born striker, who is a part of the Spain squad preparing for the World Cup finals, has been identified by José Mourinho as being what Chelsea need to win the Premier League title.

Chelsea were four points short of champions Manchester City, and their challenge came in spite of the lack of goals from their centre-forwards. Samuel Eto’o, Fernando Torres and Demba Ba contributed a total of 19 in the league, with Eto’o scoring nine of them. Mourinho would bemoan the shortfall at various junctures of his first season back at Chelsea.

He believes that the powerful and ruthless Costa can make the difference. The 25-year-old is fresh from his break-out season, in which he scored 27 goals in 34 league starts for Atlético, plus eight in nine in the Champions League, as his club won La Liga and were beaten by their city rivals, Real, in the European Cup final.

One of Costa’s Champions League goals came from the penalty spot against Chelsea in the semi-final second leg at Stamford Bridge, which his team won 3-1 to progress by the same scoreline on aggregate. It was Costa’s first season in the Champions League.

Chelsea were impressed with him before they saw him up close against them, despite his relative toils over the second half of the season. He had scored 23 of his goals in all competitions by 21 December, with the other 12 coming over the five months that followed. He struggled a little towards the end of the season with injury. Previously, he had never scored more than 10 league goals in a season.

Chelsea have paid the buyout clause in Costa’s contract – he shares the same agent as Mourinho, Jorge Mendes – and the club are pushing ahead with the rest of their business.

It is possible that they will have further dealings with Atlético, as they have an interest in the club’s Brazil left-back, Filipe Luís, and their Portuguese midfielder, Tiago, who played for Chelsea in 2004-05, during Mourinho’s first spell at Stamford Bridge.

The club need a left-back to replace the departing Ashley Cole and another midfielder to replace Frank Lampard. Tiago is available on a Bosman free transfer and he and Luís would help smooth Costa’s integration in London.

Atlético have agreed a deal to sign the 19-year-old forward Ángel Correa from San Lorenzo in his native Argentina but they remain in the market for a more experienced option up front and Torres, who made his name at the Vicente Calderón, is under consideration for what would be an emotional homecoming.

Atlético are also interested in another Spanish striker – Roberto Soldado, who struggled at Tottenham Hotspur last season after a £26m move from Valencia. The Spanish champions announced the signing of the goalkeeper Miguel Moya from Getafe on Wednesday, increasing the likelihood that Thibaut Courtois will not be joining on loan from Chelsea for a fourth successive season.

Chelsea have already agreed a deal with Paris Saint-Germain to sell David Luíz for an initial £40m – the fee could rise to £50m – although the French champions have yet to confirm officially the Brazil defender’s arrival. That is only a matter of time. Mourinho likes Real Madrid’s French centre-back Raphaël Varane, while the club are also monitoring the situation of Cesc Fábregas, who could be available for £30m from Barcelona.

Mourinho expects Eto’o to depart under freedom of contract this summer while the futures of Torres and Ba remain doubtful, as does that of Romelu Lukaku, another striker who is technically back at Chelsea after the completion of his season-long loan at Everton. Mourinho also rates the Bayern Munich striker Mario Mandzukic. Guardian Service