Extraordinary synergy between Cacic strategy and players’ passion and commitment 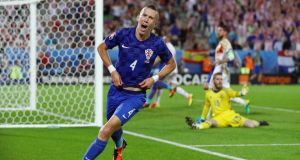 Ivan Perisic: one of the best at the tournament so far. Photograph: Ian Walton/Getty Images

There have been banners on bridges, flyovers, skyscrapers and ancient city walls, with messages raging from “You are the pride of Croatia” to “By God’s will, you’ll lose everything” and “Stop the mafia”. There was moral outrage, lynch mentality and media strife in the aftermath of the Saint-Étienne incidents, where fans lit flares and threw them on the pitch before starting a scuffle among themselves.

Some commentators have denounced the troublemakers as “unpatriotic” and “enemies of the state”. Others have tried to put things into perspective by saying the riots were a desperate attempt to bring international attention to the sad state of things in domestic football, whose leaders, Zdravko Mamic and Damir Vrbanovic, are charged with involvement in organised crime and tax evasion. They have denied wrongdoing.

The nation’s president, Kolinda Grabar-Kitarovic, called an emergency cabinet session to discuss football hooliganism, but it is unclear what the government can do, having just collapsed after five months in power. Only a day before the events in Saint-Étienne, the ruling centre-right coalition lost a motion of no confidence in parliament. Croatia has never looked more divided since independence, and football laid bare the cracks in the society’s tissue.

Hundreds of miles away from it all, the Vatreni are playing their best football in years – and arguably the best we have seen at the tournament so far.

Cacic’s match preparation defied all expectations. Against Turkey, he sacrificed Ivan Rakitic’s attacking contribution and used him as a marker to cut off ball distribution from the opponent’s deep-lying playmaker, Selcuk Inan. He also opted for a far more pragmatic approach of giving up midfield dominance in favour of firing numerous crosses from the wing for Mario Mandzukic, who wrestled with Turkey’s centre-backs and opened up space for others to come in from behind.

But the stubborn Cacic, who used to fix television sets for a living and ran a cafe in Zagreb when he was out of a job in football for years, kept the faith. He has tried to earn the players’ respect by acting as a mild father figure. He listens to what they want and how they feel and has managed to get them focused on football, perhaps as a defence mechanism from all the bad energy back home.

But the players deserve credit for carrying out Cacic’s instructions almost to perfection.

Ivan Perisic has been one of the best at the tournament so far. The captain, Darijo Srna, who buried his father in between the first two Croatia matches, is playing like his decade-younger self, and Rakitic’s versatility renders the team very flexible. Fans have expected Modric to be distracted by his status as a key witness in the trial against Mamic, set to start in September, but he looks like a man on a mission and is finally a true leader on the pitch.

Nikola Kalinic replaced Mandzukic in the Spain game and performed superbly. Vedran Corluka has been a hero, bleeding for his team and suffering the indignity of wearing a peculiar and unglamorous water polo cap that pretty much ruined his status as the team’s sexiest player.

Above all, they have looked a true team with a clear strategy, playing to their strengths. That has barely happened for Croatia in the post-Slaven Bilic era.

Faced with a deep – and deeply worrying – divide back home that transcends football, the players have found the only way out by giving their all in every game. They may not be that innocent themselves, having kept silent about everything that is wrong with Croatian football – but right now, for them, it is not about the federation, the fans, the right wing versus the left wing. It is about playing football, team spirit, patriotism and despair. Now, with Portugal waiting in the last 16, how far can it take them?

1 Gordon D’Arcy: If South Africa moves up north, it could all go south
2 Charlesland Golf Club set to close permanently in December
3 South African franchises could join Pro16 by next March
4 Stephen Kenny feeling hopeful ahead of Euro 2020 playoff
5 When Down’s 1960 All-Ireland victory brought down barriers
Real news has value SUBSCRIBE
Crossword Get access to over 6,000 interactive crosswords