Rich Brazilians don’t want Brazil to win . . . they fear it could propel Rousseff to a second term 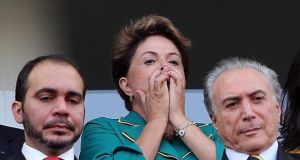 Brazilian President Dilma Rousseff (centre) during the FIFA World Cup 2014 Group A between Brazil and Croatia at the Arena Corinthians in Sao Paulo. Photograph: EPA

The winters are one of the best things about Brazil. In São Paulo, winter means you should carry a jacket in the evening, but in Fortaleza the only way to tell winter is upon us is a shorter day.

On midwinter’s day in Fortaleza you can sit in a beach bar four hours after sundown drinking caipirinhas in shorts and flip flops.

Brazil manager Felipe Scolari says he prefers to play national team games in the northeastern cities like Fortaleza rather than in the giant cities of the south. And after attending Brazil matches against Croatia in São Paulo and Mexico in Fortaleza, you can see why.

Fifa’s ticket prices ensured that both crowds were drawn from the more prosperous classes of their respective cities, but the crowd in São Paulo seemed more prosperous. One rough indicator was that in Sao Paulo, most of the home fans seemed to be wearing official Brazil jerseys, whereas in Fortaleza knock-offs were noticeable.

You could see a concentration of real jerseys in Fortaleza in the important seats in front of the press box. These magnates and celebrities often seemed to have their own names printed on the back of the livery as opposed to the name of a player. Those wearing knock-offs do not have that option because the vast majority of Brazil knock-offs in the world come with “Neymar Jr 10” on the back.

The other difference was the intensity of atmosphere. In São Paulo it was the World Cup opening game – a match that drew a big-event crowd from the largest city in South America. The crowd was noisy and jubilant but the home support were hushed after Marcelo’s own-goal gave Croatia an early lead, only recovering its voice after Neymar’s brilliant equaliser.

‘Sing don’t cry’ In Fortaleza there was full-throated support throughout. But the crowd

had an advantage in the form of 15,000 Mexican fans in the stands belting out their mariachi anthem, Ay ay ay ay, canta no llores! – sing don’t cry.

The other big atmospheric effect contributed by the Mexico fans was the taunting of Brazil goalkeeper Julio Cesar whenever he took a goal kick. A variant of this will be familiar to everyone who has ever attended a football match, but the Mexican fans have made a particular speciality of it. Every Mexican joins in a sustained “oooooooh!” that builds in intensity to the instant Cesar kicks the ball, whereupon everyone shouts “Puto!” which literally means [male] whore. In everyday use the term translates roughly as bitch, but it is also used pejoratively against gay men.

After a couple of rounds of this the Brazilians cottoned on and started giving the Mexican keeper the same treatment. It contributed to the generally raucous atmosphere and perhaps seemed like fun at the time, but Fifa has taken a dim view and they are likely to punish Brazil and Mexico for homophobic abuse.

It was notable, however, that while the goalkeepers got a hard time in Fortaleza, there was no chanting against the president, Dilma Rousseff.

The crowd in São Paulo had abused her savagely, chanting “Hey, Dilma, vai tomar no cu”, essentially: f**k you, several times before and during the game. There was booing and more abusive chanting when Rousseff appeared on the big screen celebrating the goal that had made it 2-1 to Brazil: not you Dilma, you can’t join in.

A friend who happened to be at the game in Fortaleza to wine and dine some Brazilian executives told me that in his experience, rich Brazilians don’t want Brazil to win the World Cup. They fear that the Hexocampeonato could help propel Rousseff to a second term in October elections.

Rousseff’s candidacy was confirmed on Saturday at the Workers’ Party Congress in Brasilia. Speaking from under her campaign logo – her first name in stylised handwriting with a star instead of a dot over the i, reminiscent of the Oprah Winfrey trademark – she set out an agenda including reform of government bureaucracy and broadband access for all Brazilians.

Her poll ratings are below 50 per cent, whereas her predecessor, Luiz Inácio Lula da Silva, known as “Lula”, left office in 2010 with astonishing approval ratings of more than 80 per cent. There have been no significant shifts in policy in that time, but Rousseff is paying the price for an economic slowdown and the fact that she lacks Lula’s charisma. Now the right-wing press – which is most of the press – is getting stuck in.

The likely tone of the presidential campaign can be gauged from the fact that Aécio Neves, the scion of a prominent political dynasty and candidate for the Social Democracy Party (a neoliberal party, despite the name) recently criticised Rousseff’s “permanent bad temper in office and huge arrogance”.Similar criticism tends to be thrown at any woman who is successful in politics.

The right wing hated Lula also, but his appeal among the masses never wavered. No doubt he benefited from the halo effect of a sustained boom, but his political trump card was the Bolsa Família, a children’s allowance for low-income mothers, which proved a popular progressive measure.

The venom directed towards Rousseff seems like the resentment of a rich right wing that has become wealthier during the 12 years of Workers’ Party-led rule, but thinks it should be richer still. If the millionaires of the Brazilian national team do win O Hexo in Rio next month, they will be heroes to the people and maybe also traitors to their class.

1 The Offload: Ireland are stuck in no man’s land
2 Nicky English: Galway and Waterford face battles with fatigue in All-Ireland semis
3 Davy Russell on neck injury: ‘it was a very close one and I dodged a bullet’
4 Every kind of wind imaginable was against Tipperary football - and they came through
5 Crowds of 4,000 to return to sporting events in England from next week
Real news has value SUBSCRIBE
Crossword Get access to over 6,000 interactive crosswords