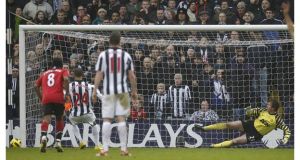 Yet it barely told the story of a controversial match, the majority of which the hosts will forever be convinced United should have played with 10 men.

In addition, Wayne Rooney ended his nine-month wait for a goal in open play, James Morrison levelled with a brilliant volley and Peter Odemwingie missed a second-half penalty after Gary Neville had inexplicably escaped conceding one before the break.

That United ended the game with Rooney limping badly following a tackle by Chris Brunt that initially led to him leaving the field, only added to the drama.

At 35, Neville’s career has lasted far longer than anyone had the right to expect when his ankle was broken in a tackle with Gary Speed at Old Trafford in 2007. The best right-back of his generation by a mile, Neville has shown admirable fortitude to bounce back from a succession of injuries since, most of them muscular.

But the time is surely drawing near where Alex Ferguson no longer feels he can rely on his one-time skipper and most committed of lifelong United fans.

On his last Premier League start, at Stoke in October, he was substituted at half-time and was lucky to get that far as, by common consensus, he should have been sent off.

Today, there was no doubt at all.

As Graham Dorrans raced into the area, only Tomasz Kuszczak between him and the goal, Neville lunged in. No amount of TV replays could get his boot anywhere close to making contact with the ball. As Dorrans went down, the stadium waited for a penalty and red card.

The one man who did not concur was the only one who had the power to make the decision, and from that moment Chris Foy struggled to convince anyone he was going to have a good day. It should have been the moment that completed a magnificent comeback for the hosts, who had fallen behind after just three minutes.

More than most, Rooney had reason to be glad to see the back of 2010. It seems the New Year promises a new beginning for the 25-year-old.

As Gabriel Obertan laid the ball back for Patrice Evra to swing a cross to the far post, Rooney intelligently waited, then stooped slightly and headed the ball back to the far corner. It was his first goal in open play since he scored an equally early goal in the first leg of the Champions League quarter-final with Bayern Munich in March.

On that occasion, United failed to capitalise and so it was again.

The Red Devils were already on the back foot when Nemanja Vidic climbed above Peter Odemwingie, but got insufficient power in his header to get it past Morrison.

As a former West Brom player, Kuszczak is used to the dimensions of the stadium. No amount of local knowledge could have helped him keep the 24-year-old’s thunderbolt volley out. West Brom shrugged off the disappointment at Foy’s mistake and continued to enjoy the best of things.

Odemwingie was a repeated threat, as was Chris Brunt, who went close with decent opportunities either side of the interval. The penalty they should have had finally arrived seconds after a double United substitution that included an ineffective Dimitar Berbatov being replaced by Hernandez.

Rio Ferdinand was adamant there had been no contact with Thomas as the tricky wide-man cut inside as he entered the box.

Foy decided otherwise. But though Odemwingie strode forward with confidence, there was none behind the actual kick, which rolled wide to groans of disappointment from the home support.

It was United’s turn to be ranting at Foy as they claimed Thomas had deliberately stuck out an elbow to block Fabio’s cross.

The decision again appeared to be incorrect, although a couple of minutes later, no-one in red really cared as Rooney dropped a corner on to Hernandez’s head inside the six-yard box.

It was not quite all over for United, who had to survive a late pummelling, with Nemanja Vidic coming to their rescue with a magnificent clearance to deny Thomas, although the cost of victory could be high, depending on the extent on Rooney’s injury.