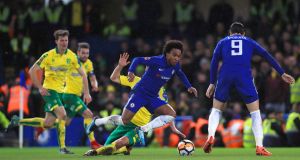 Willian is tackled by Timm Klose during Chelsea’s FA Cup third round replay against Norwich. The incident was not referred to the VAR. Photograph: Mike Egerton/PA

And so the VAR debate rages on, with rage now being the apposite word. After Tuesday night’s widely-praised decision to overturn a close on-field offside call and allow Leicester’s second goal against Fleetwood Town – “VAR at its best,” trilled Michael Owen – came a contrasting experience during Wednesday’s FA Cup replay between Chelsea and Norwich. On this occasion Willian fell over Timm Klose’s outstretched leg inside the penalty area shortly after the start of extra time, and instead of pointing to the spot the referee booked the Brazilian and gave the visitors a free-kick. When the VAR failed to overturn the decision Alan Shearer, part of the BBC’s panel of pundits, was apoplectic.

Even if the decision had been clearly wrong – which it wasn’t, but we’ll come on to that – Shearer’s reaction was childish and ill-informed, and by his own admission – “I was very doubtful about it” – fuelled by prejudice rather than genuine analysis.

Being employed to have opinions does not mean he has to leap two-footed into them, studs up and full of fury. And by being so judgmental and so outspoken Shearer has unnecessarily brought the focus onto the VAR and away from the humiliating fact that three Chelsea players were cautioned for simulation in one match against opponents from a lower division. Pedro’s offence in particular was cheating of the most callous kind. If anything was “all wrong” on Wednesday night, it was Chelsea’s grasp on the principles of fair play and sportsmanship.

Over recent years it has become increasingly easy to win a penalty. In the first 10 completed Premier League seasons – the first three of which featured 22 top-flight teams and thus more matches – there were, on average, 62 penalties. In the last 10 completed Premier League seasons there were 92. At present any contact at all between defender and attacker inside the area is widely and wrongly seen as being sufficient reason to award a penalty.

If having a VAR emboldens referees not to make marginal penalty awards, in the knowledge that they will be overruled in the case of glaring error, it will also remove the incentive that encouraged Pedro and Álvaro Morata to tumble on Wednesday night and in so doing lead to faster and fairer play. If a few probably-penalties go unawarded along the way, it is a price well worth paying. On this path, Willian’s trip was a step in the right direction.

In that particular incident Klose certainly flung his leg into Willian’s way, without making contact with the ball. But because his leg was on the ground as the Brazilian passed, and it appeared that Willian’s natural stride pattern would take him over Klose altogether, it could be argued that it was actually the Chelsea player who initiated the contact. This was obviously the referee’s reading of the situation, and as the VAR protocols state that “the original decision given by the referee will not be changed unless the video review clearly shows that the decision was clearly wrong” his decision had to stand, just as an on-field decision to award a penalty would also have stood.

“It’s someone else’s opinion and that’s why it’s a shambles,” Shearer seethed, but if any situation remains uncertain despite video analysis it is not “someone else’s opinion”, it is the referee’s alone. As it would have been had VAR not been in use, but with an added layer of security.

This is, at least for the English, a new application of technology. The match officials themselves have benefited from months of robust training and regular practice before its introduction, but fans, managers, players and pundits have not. To rush to furious judgment now, based on our currently pathetically limited experience, would be infantile, whatever the conclusion.

As our dipped toe leads inevitably to full VAR immersion there will probably be some glaring errors, and there will certainly be delays; on occasion other people may come to conclusions that are not the same as our own. All of this will be irritating, but it will add to our knowledge and to the referees’.