Margaret Byrne, from Northern Ireland, hasn’t been seen since conclusion of the case 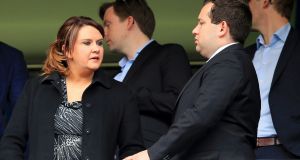 Sunderland AFC Chief Executive Officer Margaret Byrne pictured on the left. During the trial the jury was told that, by May 4, chief executive Margaret Byrne met Johnson and his barrister and she had all the messages exchanged and transcripts from police interviews. Photo: Mike Egerton/PA Wire.

Sunderland football club’s chief executive is believed to have left the country following mounting pressure over her conduct during the child abuse trial of disgraced footballer Adam Johnson.

Margaret Byrne, who was expected to appear as a defence witness for the winger but failed to take the stand, has not been seen in public since the conclusion of the case.

The Co. Armagh native is facing accusations that she knew shortly after Johnson’s arrest that he had kissed and sent explicit messages to his 15-year-old victim. The club has been asked repeatedly to explain why the £60,000-a-week winger was allowed to return to the team and earn £3m despite his private admissions.

Sources told the Guardian that Byrne has been staying in a villa in Portugal. A Durham police detective is understood to have asked the club for her whereabouts, and was told that she was there.

Byrne was not at her Sunderland home when the Guardian called on Friday, and she was believed to be absent from St Mary’s stadium for her team’s game against Southampton on Saturday. A spokesman for Sunderland AFC said: “There will be no further comment at the present time.”

Byrne had been due to give evidence for the defence about what time Johnson arrived at the Stadium of Light on January 30th 2015, the evening he performed a child sex offence on the girl. However, she never appeared.

Sunderland lifted Johnson’s suspension on March 18th last year – 16 days after his arrest – and he played until he was sacked 24 hours after he pleaded guilty to two child sex offences on February 10th.

But the trial at Bradford crown court heard that Byrne, a former criminal lawyer, had copies of Johnson’s police interview – in which he admitted kissing the girl – and his sexually charged WhatsApp messages by May 4th 2015.

The chief executive left Sam Allardyce, the club’s manager, to face a series of questions on the issue at a factious press conference on Thursday.

In a carefully worded statement issued after the verdicts, the club said it would have sacked Johnson immediately had officials known he intended to plead guilty to two of the charges.

However, the club did not comment on evidence heard in court that Johnson admitted privately to the club as long ago as May 4th 2015 that he kissed the teenage fan and sent her sexually explicit messages.

In evidence to his trial, Johnson said he told “everything” to Byrne at a meeting and there was no suggestion he would be sacked.

In the press conference before Sunderland’s game against Southampton on Saturday, Allardyce was asked repeatedly about the issue only for the media manager, Louise Wanless, to block questions.

After a series of stonewalled questions, a journalist asked: “Where is the name of the football club at the minute as a result of Adam Johnson being found guilty?” Wanless intervened: “Guys, stop.”

In another tense exchange, Allardyce was asked whether he had seen the police interview transcripts and WhatsApp messages that suggested Johnson was guilty. Wanless said: “Thanks, we’ll move on,” before Allardyce replied: “No. I’m the manager, why would I know that?”

The journalist then asked whether he should have been given that information, but Wanless said: “Guys, we’ll move on from there please.”

On Thursday night, the Durham police detective who led the investigation, DI Aelfwynn Sampson, said: “At the centre of this we have a 15-year-old girl who was an avid Sunderland fan and a massive fan of Adam Johnson, she describes him as her idol, she’ll want to know why he was allowed back on the pitch.”

Johnson, who is awaiting sentencing after his trial concluded last week, has reportedly admitted jail time would allow him to “learn from my mistake”.

The Mirror on Sunday reported that he made the admission to a friend, Danish businesswoman and model Julie Hall, after he was convicted last Wednesday. Hall told the paper Johnson said: “It’s my own fault. I made a huge mistake. Now I need to do what I need to do – hopefully it will be fast. I just need to be occupied and think about something else, and hopefully I will come out having learned from my mistake.”

Hall reportedly added: “He explained to me he met this girl and he made a mistake. He told me he was going through the courts shortly after I met him, so he just explained what was going on, and why he was accused.

“Two days ago he said, ‘I’m going to jail.’ Then we were talking about for how long and when he was going to jail. He said ‘end of this month’. He said he hoped it (the sentence) would be fast. And he said he wanted to learn from it and come out a better person.”

She added: “He has told me previously they didn’t sleep together, and that’s it. He explained he didn’t have sex with her, so he didn’t think he was going to jail. He said they kissed, nothing more.”

Byrne, a qualified solicitor who sits on the FA’s football regulatory authority committee, has refused to answer questions about her involvement in the case. She became chief executive of Sunderland AFC in summer 2011, four years after joining the club as secretary under the then-chairman, Niall Quinn, after she answered a job advert in the Sunday Times.

She also sits on the Premier League’s legal advisory group and is company secretary of the Foundation of Light, Sunderland AFC’s charity arm that works with thousands of children across the region.

1 America at Large: On Long Island, longing for a return to our field of dreams
2 ‘This is sick’ - seventh-tier Swedish club cancels friendly after betting mayhem
3 ‘For 25 minutes I ran out of oxygen’: Pepe Reina on his coronavirus battle
4 Ireland’s playoff pushed back as Uefa prioritise European club competitions
5 Woods and Mickelson to play coronavirus relief match – reports
Real news has value SUBSCRIBE