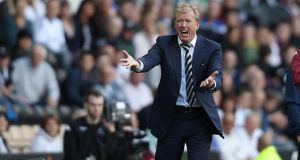 Steve McClaren has been confirmed as the new Newcastle United manager. Photograph: PA

Steve McClaren has set his sights on winning cups at Newcastle and finishing in the top eight of the Premier League after being confirmed as their new manager.

McClaren, who has signed a three-year deal with an option for a further five years, said he had been assured by the club that they share his ambitions. His contract includes lucrative incentives to secure Newcastle’s first trophy since 1969.

“I am privileged to be appointed head coach of Newcastle United,” McClaren told the club’s website. “This is a big club with a wonderful heritage.

“St. James’ Park is like a cathedral on a Saturday afternoon, a symbol for the city and I am excited to be given this opportunity. I know how important Newcastle United is to the city and the region.

“The supporters are some of the most loyal, passionate and devoted in the world. Despite everything they maintain their faith. We owe it to them to do everything we can to reward them with success.

“There’s a lot of work to do, but the club has made it clear about wanting success and I would not have come here if I didn’t believe they were serious.

“This club has waited far too long to win a trophy. That’s one of my primary objectives here. I’ve already won trophies as a manager, and a club the size of Newcastle United should be winning cups and finishing in the top eight in the Premier League.

“I’m determined to give the supporters of Newcastle United a team they can be proud of. The hard work starts now.”

The 54-year-old succeeds John Carver, who ended last season in charge after Alan Pardew’s departure but was sacked on Tuesday.

McClaren turned down the chance to take over for the final games of last season as Newcastle battled, ultimately successfully, to avoid relegation from the Premier League. He opted to remain with Derby County but was dismissed by the Midlands club after failing to make the Championship play-offs.

The former England manager has not taken charge of a Premier League side since 2006, when he left Middlesbrough for the national job. His other previous clubs include FC Twente, where he won the Dutch title, and Wolfsburg, where his spell was far less successful.

The Newcastle owner, Mike Ashley, has indicated that he will invest significantly in the squad this summer.

Newcastle’s managing director, Lee Charnley, who was placed in charge of the recruitment process by Ashley, said: “From my first meeting with Steve I knew he was the perfect fit for Newcastle United. I am delighted that we have secured the services of one of the best coaches in English football.

“He has 20 years’ experience, including for the national team and at the highest level of European competition. His most notable achievements include winning the Eredivisie with FC Twente and guiding Middlesbrough to a League Cup win in 2004 and to the final of the UEFA Cup in 2006.

“He has a proven track record of being an innovative and forward-thinking coach and developing and improving players, which was a key quality we sought in the individual to fill this role.

“Steve also brings with him a great enthusiasm and passion for the job, the club and the city, which he articulated to me very clearly from the outset.

“This is a huge job which comes with considerable pressures and I am convinced that Steve not only understands the weight of expectation that comes with this role, but that he has the strength of character and professionalism befitting of a club of our size and status.

“Steve has been tasked to secure a top-eight finish in the Premier League and he is also heavily incentivised to try to win a cup competition.

“We recognise supporters’ strong desire to win a trophy, an ambition which the club now shares as Mike Ashley made clear in his comments on the final day of the season. Steve is excited by this and he has our full support in trying to achieve this goal.

“Our immediate focus will be on working with Steve to assess and improve upon our playing squad, as well as appointing individuals to his backroom staff.”