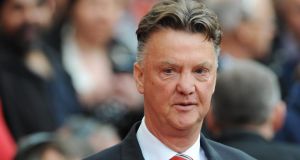 Listen to Louis van Gaal on Robin van Persie and the impression given is hardly that the striker is fighting to retain his place in the Manchester United XI. The manager is confident that although his Dutch compatriot has scored only twice for him at United, the 31-year-old requires only luck to rediscover his prolific form.

Yet Chelsea’s arrival at Old Trafford tomorrow may be a last chance to prove himself before Wayne Rooney’s return from a three-game ban for the trip to Manchester City for the derby in the following match.

Van Gaal is backing Van Persie to score against José Mourinho’s side and he could certainly use a goal, although Radamel Falcao, Juan Mata, Adnan Januzaj and James Wilson also factor into this equation as the manager decides who should form his front three. Given that Rooney has what Van Gaal has called “special privileges” as captain and that Falcao was the club’s star signing of the summer, if Van Persie continues to misfire he may come under threat.

The former Arsenal striker has appeared sluggish so far, his two goals coming in seven starts. But Van Gaal still believes he is seeing the best of the man he appointed his Netherlands captain.

“I think he is more fit than ever,” said the manager. “He doesn’t score so much. In the Dutch team he has scored more than now for Manchester United and then he was not so fit as now. That’s remarkable, but he scored in [almost] every game for me in the World Cup in spite of maybe his 80 per cent fitness. He scored four goals out of six games and then also a penalty. So maybe now he is playing better but doesn’t score as much.”

Van Persie’s two goals this season came in consecutive outings – in the 5-3 reverse at Leicester City and the 2-1 home win over West Ham United – towards the end of September. On Monday evening, though, as United trailed 2-1 at West Bromwich Albion, he showed a flash of quality when using his weaker foot. “He’s a little bit unlucky, like against West Bromwich Albion when he shot with right foot – it was hard to believe that that shot stayed out of the goal,” the manager said. “So a striker needs also a bit of luck and then the confidence is higher but he’s self-confident so I expect he shall score and maybe against Chelsea. ”

So far Van Persie has remained injury-free, which is a fillip after previously admitting to managing persistent issues for years. Perhaps this is why Van Gaal mentioned his fitness this term. Yet sooner or later age and his fragile physique will catch up with him.

Last season he suffered nine separate injuries but still managed 12 goals in 18 Premier League starts. In the previous, title-winning year there were 26 in 35. These figures may be why the manager is adamant his star forward is not past his peak. “He has showed that at the World Cup and is showing that now except scoring goals but that is only a matter of time,” said Van Gaal before outlining his all-round contribution. “Every striker has to be at the attacking point. He has to play with the other 10 players. That is also important.”

Van Gaal thinks Diego Costa will appear for Chelsea. The Spain striker has a continuing hamstring issue and has been ill this week. But Van Gaal believes Mourinho will start him. “I think that he shall play with him when he can because he wants to win. Of course he can play. He has trained individually, I have heard, I have read on the websites. I also have my eyes always open. He has scored nine out of seven, that is remarkable, so he is in a good shape I think but he was ill so you never know.”

Angel di Maria picked up a thigh injury at West Brom but Van Gaal confirmed that he and Ander Herrera, who was also replaced, are available. “Ander was already fit and, with Di Maria, I said after the match that normally it [the injury] should not be so heavy and it’s not heavy.