Roberto Martinez can have few complaints if taxi calls soon 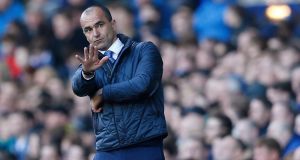 Everton fans are losing patience with the club’s manager Roberto Martinez especially after the listless display against city rivals Liverpool at Anfield on Wednesday. Photograph: Reuters.

A performance at Wembley persuaded Bill Kenwright to offer Roberto Martinez the Everton job three years ago. In the absence of a performance that appears beyond a spiritless, directionless team at present, Wembley is where it may well end for the Everton manager on Saturday. There will be, and he can have, few complaints.

The FA Cup semi-final against Manchester United amounts to a final for Martinez. It is his last shot at redemption in an awful campaign that reached its nadir with Wednesday’s shambolic 4-0 defeat at Anfield.

Events this week – clear digs at the job-seeking David Moyes from Martinez before the derby, the deputy vice-chairman Jon Woods leaving his seat at Anfield in the 60th minute – have strengthened the suspicion that point has already been crossed. The Catalan could become the first manager to win the FA Cup with two clubs and leave both. First things first, he must overcome United with a squad that contains only two experienced defenders who are not currently doubtful for Saturday – the left-backs Leighton Baines and Bryan Oviedo.

Martinez was correct in his honest appraisal of a “horrible, horrible” and “disastrous” derby that a “chain of events” had conspired against his team.

Unfortunately for the Everton manager, the chain started long before his team set foot inside Anfield, conceded two cheap goals before half-time, lost Gareth Barry to injury during the interval, Ramiro Funes Mori to a red card, John Stones to illness and finished with two midfielders in central defence following his inexplicable decision not to include a defender among the substitutes.

Abdicating responsibility has become a feature of Everton under Martinez. Their failure to prevent or defend the two James Milner crosses that produced Liverpool’s opening goals on Wednesday came as no surprise. Nor his 4-2-3-1 formation, Everton’s structural weakness when out of possession, Stones’s careless and punished pass out of defence moments before he exited with stomach cramps – a feeling no doubt shared by those in the away section – and the latest evidence of talented individuals regressing.

Martinez has accepted persistent flaws in Stones’s game as part of his development rather than eradicating them and enabling the 21-year-old – an age worth remembering when criticising the England international – to become the outstanding defender he has the potential to be. Likewise Ross Barkley, whose physique indicates too much time in the gym and not enough improving his decision-making on the training pitch.

Failing to condemn Funes Mori on Wednesday for his dreadful foul on Divock Origi, or his pathetic badge-pulling reaction, or for damaging his team-mates’ chances at Anfield and Wembley was typical of the manager’s overindulgence of underperforming, underachieving players.

One can imagine the reaction of Mauricio Pochettino in similar circumstances. His work over the past two seasons with a younger team at Tottenham Hotspur, who finished behind Everton in Martinez’s first campaign in charge, provides a stark contrast to the disorganisation at Goodison. Spurs’ title challenge, having reached the last 16 of the Europa League as Everton did the year before, also demolishes Martinez’ argument that Europe was the principal cause of his team’s decline from fifth in 2013/’14 to 11th last season.

Saturday’s draw against Southampton guaranteed that, applying three points for a win, this will be Everton’s worst return at Goodison in history regardless of the final home games against Bournemouth and Norwich City.

The strain has told on the 42-year-old Martinez, whose decent return in the transfer market has been demolished by the £13.5m outlay in January on Oumar Niasse, currently MIA.

Before the derby the Everton manager left the distinct impression he was aware of rumours linking Moyes with a return to Goodison.

Sitting 11th again, a stubborn refusal to address fundamental flaws in his approach and, most of all, a sustained run of poor results do not bring substance to that ideal.

Everton have changed since the Moyes era ended and billionaire Farhad Moshiri brought with him promises of new investment and ambition when he acquired an initial 49.9 per cent shareholding in the club in February. That may be tested soon in terms of his first managerial appointment. Guardian Service