Supporters told not to taunt Sunderland manager with fascist salutes 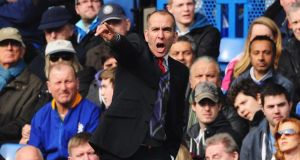 Newcastle United fans have been warned by police not to taunt Paolo Di Canio, the manager of hated rivals Sunderland, with fascist salutes.

The north east Premier League clubs meet on Sunday at St James’ Park, with supporters from both sides relishing the chance to mock the other. But police have warned fans against using racist of offensive gestures during the derby match.

Di Canio’s controversial appointment led former British foreign secretary David Miliband to step down from Sunderland’s board because of the Rome-born manager’s “past political statements”. Di Canio, 44, was fined and handed bans for making right-arm salutes to fans in 2005 when he was a Lazio player. Since he joined Sunderland as Martin O’Neill’s replacement, he issued a statement denying he was a racist adding “I do not support the ideology of fascism”.

Ahead of the Tyne-Wear derby, operations commander chief superintendent Steve Neill, said: “Offensive gestures, particularly those with a suggestion of racist connotations, are completely unacceptable and we will take positive action against anyone seen acting in an offensive or racist manner.

“While some individuals may see this sort of behaviour as a means of poking fun at opposing fans – it is not a joke. Offensive behaviour can constitute a criminal offence and such behaviour is taken seriously.

“Football matches are routinely monitored by CCTV and even if action is not taken during the match, it can be checked retrospectively and we have demonstrated on numerous previous occasions our ability to trace offenders and put them before the courts, which can lead to a criminal record and possible football banning order.

“I would urge fans to act responsibly and reflect upon the impact any form of disorder or offensive behaviour has on others, themselves, the reputation of both clubs and the North East.”