Mourinho and Guardiola clash over England’s treatment of Sterling 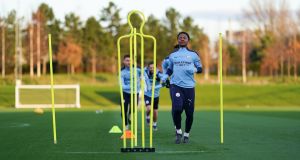 Pep Guardiola has criticised José Mourinho after the Tottenham manager cast doubt over the legitimacy of Raheem Sterling’s withdrawal from England duty.

Sterling returned to training with City yesterday after being sent home from the national team camp on Monday, a calf injury being the reason provided. He had missed the previous day’s match in Belgium and was back in his club’s care by the time England faced Iceland on Wednesday, but is in contention to start when City visit Spurs this evening.

“Mourinho has to speak to the doctor for the national team of England and the doctor for Manchester City, ” Guardiola said after being informed that Mourinho had predicted Sterling would be passed fit to play and demanded an explanation from Gareth Southgate.

Mourinho had drawn a contrast with Eric Dier, who missed two Spurs games after sustaining a hamstring problem during the October international break. He had also requested that Southgate reveal who he was referring to when he said in the week that managers were applying “huge pressure” to reduce players’ national team duties. Guardiola strongly denied any underhand behaviour on City’s part.

“He has to go to the doctors of the national team and Manchester City,” reiterated Guardiola when asked whether City had pushed England to withdraw Sterling. “Except maybe Mourinho is a doctor, I don’t know.

“Listen, I’m not going to answer anything about José. I said the doctor because he accused us of something we have done that is not true. You have to speak to the doctors about these other things, don’t ask me. I’m almost 50, I’m old enough to understand . . . ”

It is a fresh episode in an age-old feud that had cooled in recent years. “Of course we all know that Sterling is going to play,” Mourinho had said. “When Eric Dier left the national team injured last month, he didn’t play [the next] two matches for Tottenham. He didn’t play the Premier League match and the Europa League match. He needed a couple of weeks to recover, and Raheem is going to play tomorrow. These are the little details that I think Gareth should explain to us.”

Asked how he would feel if the returning Sterling scored the winner against his side, Mourinho said: “I think you have to wait until March and ask that question in March to the person you have to ask.” He was presumably referring to Southgate.

Mourinho also expressed concerns about the safety of international football during Covid-19. His right-back Matt Doherty is self-isolating following a positive test after playing in the Republic of Ireland’s defeat against Wales last Sunday.

“It is a bit difficult for me to understand that the player, after a game, on the same night, has a positive result. Why after, why not before? It’s a simple question, probably with a simple answer, but I don’t have the answer.”