Mick McCarthy ready for final climb back to Premier League 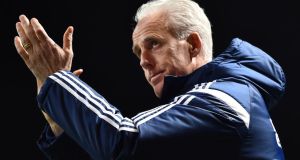 Ipswich Town were bottom of the Championship when Mick McCarthy took over two-and-a-half years ago. Photograph: Ben Stansall/AFP Photo/Getty Images

“When I got promoted with Sunderland, a really good pal of mine, Ray Treacy, God rest his soul, rang me up and said ‘Resign!’,” McCarthy says.

“I said: ‘What are you on about?’ He said ‘I’m telling you, resign, because you’ll get no money, you won’t have a team and you’ll get the sack by the end of the year’. Of course I’m saying: ‘Ray, will you feck off, that’s not happening, I’m not resigning.’ He says: ‘How much have you got to spend?’. I said: ‘Well, I’ve got £6 million, and that includes wages, fees, everything’. And he said: ‘Oh, pack it in now, just do one while your reputation’s intact!’ So I told him where to go . . . and, God love him, he was right.”

“I think that’s a bit unfair, I’d like to have been given £50 or £60m to spend like some other managers!” says the man, who, in addition to his success at Sunderland, guided Wolverhampton Wanderers to promotion in 2009 before becoming the first manager in 30 years to keep them in the top-flight for two successive seasons before being sacked when they dropped into the relegation zone in the third year.

“I’ve no bitterness towards Wolves at all but the one thing that was taken away from me was the opportunity to keep them up for a third season running. We might have still gone down but I don’t think we would have, as all the players were still with me. Had I kept them up again, I would have been viewed very differently – you’re one of the likes of Tony Pulis’s stature, keeping teams in the league and keeping them progressing. So maybe the reputation is unfair but I don’t get upset about it.”

McCarthy has never been given the financial backing usually required to survive in the top flight. “There is a fair bit of satisfaction doing it on a shoestring but when you get to the Premier League, you need more help than that,” he says.

Yet here McCarthy is, at 56, doing it on a shoestring again. Ipswich were bottom of the Championship, without a win in 12 matches, when he took charge two-and-a-half years ago. They finished 14th, then ninth and then, this season, defied all pre-season predictions by reaching the play-offs with a side made up mostly of free transfers and loanees.

“What is my job and the team’s job description?” McCarthy asks. “It’s to get results. There are 18 teams below us – some of them will have played sexier football, and played three at the back, or 4-3-3 and fanned out into all sorts, but they’ve not got as many points as us. Some of the goals we’ve scored and some of the football we’ve played have been excellent, but we are tough, resolute, belligerent, hard to beat and don’t let teams play if we can – and I don’t make any excuses for that. Is that not part of the game?

“I watched Barcelona stop Bayern Munich playing – they all pressed up front, but because there all wonderful footballers that’s seen as somewhat different but it’s not really. I’m not classing us with Barcelona – far from it, we’re the antithesis of that – but the point is that when we lose the ball we try to get it back as fast as we can and try to put it in their net however we can. All ways of doing that should be admired and celebrated if it’s done well.”

While being difficult to play against seems to a recurring feature of McCarthy sides, they also appear to be a delight to play for. This is a manager with a proven ability to foster a mighty esprit de corps, his teams continually exceed the sum of their parts. McCarthy will be forever linked with the clash with Roy Keane before the 2002 World Cup that precipitated the end of his seven-year tenure of the Republic of Ireland but, the fact is, it was an anomaly. Most past and present players have a deep affection for McCarthy and that bond seems to help achieve synergy.

“The players know I respect them and that door is always open. I dictate the way we play but within that framework there is room for manoeuvre. I’m not anxious that someone will throw up an idea that I hadn’t thought of – because it might be a good one. If you don’t listen to your players, you’re stupid.” Guardian Service

1 Getting behind the rotten core of rugby with Dan Tuohy
2 Football fan survey: Almost half of Irish adults say they support a club
3 Irish squad in the dark as clouds hang over Six Nations
4 Matt Williams: Like on my Ryanair flight, Ireland were suffocated by England
5 Larry McCarthy to become first overseas president of the GAA
Real news has value SUBSCRIBE