Marc Wilson a doubt for Euro 2016 after sustaining knee injury 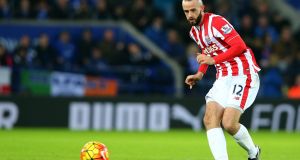 Marc Wilson’s availability for the European Championships is in doubt.

Stoke City expect to know on Monday the extent of a knee injury the Republic of Ireland central defender sustained on Saturday in the club’s FA Cup defeat to Crystal Palace, but the initial sense is that it is serious.

“Marc looks like he’s got a bad knee injury,” manager Mark Hughes said after the game.

“He’s got medial ligament damage, the physio thinks, so he’s going to be out for a period of 10 to 12 weeks, unfortunately.

“Marc’s down at the moment, as you would expect,” he continued. “He’s looking forward to the European Championship which is what he wants to be involved in at the end of this season so I’m not sure if his injury will make him a doubt for that, we hope not.”

Wilson’s injury was sustained so late in the game that there was no time even to replace him after he was taken from the pitch. The injury comes at a time when he was finally getting first-team opportunities due to the absence of others.

Stephen Ireland made a rare start for Stoke, one of a number of current or past internationals to get a run out while league regulars were rested.

Some made more of the opportunity than others. At Anfield, Darren Randolph picked up the man of the match award, with the Wicklow man turning in a strong performance to keep a clean sheet as West Ham earned a replay against Liverpool.

Fairytales were thin on the ground for the lower league clubs featuring Irish players. StephenWard’s Burnley were beaten 2-1 at Arsenal for whom Alexis Sanchez started and scored.

Darren Potter scored for MK Dons against Chelsea, meanwhile, but the Championship side were beaten 5-1 by the Premier League champions.

Former UCD midfielder Gary Dicker also had a disappointing afternoon on what may well have been his last appearance for Carlisle United. He was replaced at half-time as the League Two outfit lost 3-0 to Everton.

Roberto Martinez started both James McCarthy and Seamus Coleman in the game with the former playing all 90 minutes and the latter coming off seven minutes before time.

Sheffield Wednesday, Leeds and Blackburn are all believed to be interested in the 29-year-old.

“It seems very close,” said Martinez. “We’ve agreed terms with two teams in the Championship. It’s just a matter of time before one of the deals is clinched.

“Aiden needs to play and it’s a really good opportunity for him to do that in a very demanding fixture list for a team that can get a really good tempo into Aiden for Euro 2016.

“That will make sure he comes back having had a good period of football and of having an impact for whichever team he joins.”