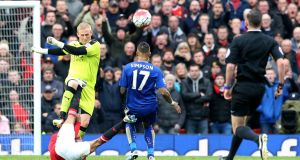 Leicester City have come so far on this journey they probably should not mind too much if the coronation has to be put off a little. Claudio Ranieri’s team did not quite have the chutzpah to confirm themselves as implausible, eccentric champions at the home of England’s most successful club but they walked off the pitch to a remarkable ovation and this could still be a valuable point, ultimately, given its implications at the top of the table.

In simple terms, it means Tottenham Hotspur have to win all their remaining fixtures to stand any chance: even a draw at Chelsea on Monday will settle everything with two games to go. Leicester’s lead now stands at eight points and even if Spurs keep up the chase by beating Chelsea on Monday the leaders can make it mathematically certain with a win, or even two draws, from Saturday’s game at home to Everton and their own trip to Stamford Bridge the following weekend.

Leicester’s inferior goal difference counts against them but, in reality, it would take something extraordinary now for them to surrender their position and they will also have Jamie Vardy back from suspension for their last two fixtures. Ranieri’s men might have swatted Swansea aside without their leading scorer last weekend but they sorely felt his absence here during the passages of play, particularly in the second half, when they stretched Manchester United’s defence without having the killer instinct inside the penalty area.

The downside for Ranieri’s men is that they will have another of their key players suspended for the Everton game after Danny Drinkwater, returning to the club where his career started, was sent off in the second half. Drinkwater’s little tug on Memphis Depay, having already been booked, earned him a second yellow card although Leicester were fortunate, perhaps, that the punishment was not more grievous. Depay was running down the line of the penalty area but the referee, Michael Oliver, ruled that the offence had taken place a foot outside and Leicester were spared the possibility of a late United penalty.

Even then, the disappointment of Leicester’s players was obvious at the final whistle, when it became apparent how much this tough, obdurate team had wanted to avoid delaying the process any more. They had looked increasingly dangerous during the second half, with Riyad Mahrez prominently involved, and it was a wonderful ovation they received from the home crowd after the final whistle.

Leicester certainly did not look like champions-in-waiting during those periods early on when they were pinned back into their own half. Their poor use of the ball must have been slightly bewildering for a global television audience tuning in for a slice of the glory and perhaps it was inevitable that their quick counterattacking would not carry the same menace without Vardy’s electricity in attack.

It was certainly a difficult first half for Leicester, with Anthony Martial giving United an eighth-minute lead and the home side moving the ball far more purposefully than the crowd at Old Trafford have seen in other parts of the season. United might have been two ahead within the first quarter of an hour if it had not been for Kasper Schmeichel’s one-handed save to keep out Jesse Lingard and the home supporters will also think back to that moment, just after the half-hour, when they were convinced a red card should have been shown to Leicester’s right-back, Danny Simpson.

As it turned out, the referee probably made the right decision giving Simpson the benefit of the doubt after his pursuit of Lingard, having inadvertently left him with a run at goal, ended with his opponent on the floor. The penalty decision late on was an error of judgment but United generally got the better of the first-half decisions, bearing in mind Marouane Fellaini’s recurring habit of swinging his elbow at an opponent and the moment, after 39 minutes, when Mahrez went down under Marcos Rojo’s challenge inside the penalty area.

In the case of Fellaini, it is not just remarkable how often he commits these offences but the frequency with which he gets away with it. This one comprised an elbow into Robert Huth’s windpipe, followed by a secondary swipe at Leicester’s centre-half, and the Football Association’s disciplinary department will surely make this one occasion when a serial offender is finally punished with a ban, jeopardising his involvement in the team’s last three league games.

As for Mahrez, perhaps the referee suspected he had thrown himself into Rojo, rather than the other way around, but the defender can consider it a let-off from an afternoon when Ranieri’s team seemed to have identified United’s left-back as a possible weak point. Morgan’s goal stemmed from him eluding Rojo from Drinkwater’s free-kick and there were at least two other set pieces when a similar tactic left the Leicester captain with a clear header at goal.

It was perplexing that Van Gaal did not alter the team’s marking policy at half-time but, that apart, United had looked impressive in the opening period and had Leicester rattled during that period when Lingard combined with the overlapping Antonio Valencia to set up the opening goal. Martial took advantage of some lax marking to drive in his 15th goal of the season and Van Gaal must have been frustrated that his team could not begin the second half with the same energy.

Instead, Leicester started to take better care of the ball and, attacking on the break, find the space to get behind the home team’s defence. What they could not do was find the decisive goal but their lead looks unassailable.