Manchester United’s only arrival of deadline day was Andy Kellett 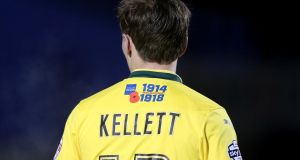 Manchester United’s only arrival of transfer deadline day was Andy Kellett from Bolton … with the 20-time English champions pipping Plymouth Argyle to the signing of the 21-year-old defender.

United have been linked with a number of the continent’s top targets this window, including Mats Hummels, Kevin Strootman and Marquinhos.

But their only incoming on deadline day was that of the little-known Kellett, who has played only four times for the Trotters.

The defender, who was on loan at League Two Plymouth Argyle until three weeks ago, moves to United on loan until the end of the season. The Pilgrims had been eager to see Kellett return to Home Park and believed the player was keen on a return.

“If he’s not going to play at Bolton, there is only one club he wants to go to and that’s Plymouth,” the Argyle manager, John Sheridan, told the Plymouth Herald last week. “I have spoken to him and he has told me that.”

As part of the deal, which was announced just before midnight, the 19-year-old United defender Saidy Janko has joined Bolton until the end of the season.

United’s other signings of the window were the free agent Victor Valdes and the 20-year-old Libyan right-back Sadiq El Fitouri from Salford City.

Meanwhile Liverpool striker Rickie Lambert rejected a deadline-day transfer to Aston Villa despite the Merseyside club being prepared to cash in on the striker for £5m.

Liverpool initially had no intention of selling the 32-year-old eight months after his £4.5m arrival from Southampton but were tempted into a rethink by Villa’s straight cash offer. The deal would have given the Anfield club a quick profit on a striker who has been limited to only 10 starts in all competitions this season but Lambert did not want to leave the club he supported as a boy so quickly.

Lambert was also the subject of interest from Crystal Palace and Hull City during the January window but their approaches were thwarted by Liverpool.

Villa’s bid, however, was relayed to the England international but the striker informed Anfield officials he wanted to stay and fight for a place in Brendan Rodgers’ squad rather than leave.

Lambert, who has scored three goals in 24 appearances for Liverpool this season, signed only a two-year contract and is likely to face a similar decision over his future this summer. Lambert was signed effectively as a ‘Plan B’ by Rodgers only for his chances to be hindered by the arrival of Mario Balotelli, Fabio Borini’s refusal to join Sunderland and the manager’s decision to deploy Raheem Sterling in attack.

Competition will increase only at the end of this season when Divock Origi completes his £9.8m arrival from Lille and Liverpool remain hopeful of agreeing a deal with Burnley to sign Danny Ings. The England Under-21 international is out of contract this summer and Liverpool want to negotiate a fee with Burnley without having to go to a tribunal over compensation.

The club announced on Monday that Philippe Coutinho has agreed terms on a new contract to 2020 at Liverpool and Brendan Rodgers claims the Brazilian has the potential to be world-class.

The 22-year-old is under contract until 2018 but has been offered an extended, improved deal as Liverpool look to secure several players for the long term. An agreement has been reached relatively swiftly with Coutinho and his representatives and a signature on the contract is expected imminently.

Coutinho has proved an astute purchase by Liverpool since joining for £8.5m from Internazionale two years ago. Rodgers believes he can reach the highest levels of the game but the Liverpool manager admits that is dependent on the playmaker improving several aspects, including his finishing.

“We have seen young Phil come into his own over the last couple of months purely because of the movement up front,” Rodgers said.

“He is the type of player who is creative and looks for the last pass but for that you need the movement in front of the ball and people to penetrate in behind. At the beginning of the season we didn’t quite have that in the team so he was having longer on the ball and maybe getting caught on it more.”

“But you can see he is in a real good moment. He is playing a lot of games and we are trying to manage him but his performances are at a really high level which is great to see because he’s a little magician with the ball.

“His courage and bravery to get on the ball is fantastic. If he can continue to improve, and there are areas where he can improve like his goalscoring, then he can get into that bracket of being world class.”

Rodgers believes the Real Madrid pair of Luka Modric and Toni Kroos are examples of the kind of player that Coutinho could develop into over the coming years.

The Liverpool manager explained: “Modric doesn’t have a big goalscoring record but he is a world class player. He is a continuity player who takes the ball in the middle of the field, can make the passes, serves the ball from behind and gets the odd goal from outside the box. He opens the door for the team in the centre of midfield. Toni Kroos is another of that type.

“Those two maybe don’t get that many goals but their role is to create the game for others, not necessarily to score 15 or 20 goals a season. Phil’s numbers will improve but it’s not the be all and end all if he doesn’t get 20 goals. His functions are elsewhere in the team.”

Steven Gerrard will be fit to make his 700th appearance for Liverpool in the FA Cup fourth-round replay at Bolton Wanderers on Wednesday, Rodgers confirmed. The Liverpool captain missed the West Ham win as a precaution against a hamstring injury, having played 120 minutes against Chelsea four days earlier, but is available for the replay and Saturday’s Merseyside derby at Everton.

“We felt it was too much of a risk on Saturday but he trained great this morning and is fine,” the manager said.