Liverpool to hold talks with Jürgen Klopp in next few days 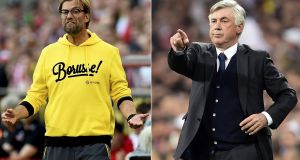 Liverpool will hold talks with Jürgen Klopp in the next few days with the former Borussia Dortmund coach their favoured candidate to succeed Brendan Rodgers as manager.

Fenway Sports Group, Liverpool’s owner, is also considering Carlo Ancelotti for the vacancy created when Rodgers’ 40-month tenure was ended shortly after Sunday’s 1-1 draw against Everton. Frank de Boer, the Ajax coach, linked himself with the Anfield job last week but Klopp is seen as the ideal appointment providing he can be persuaded to end his sabbatical for the chance to revive Liverpool.

The 48-year-old is on an extended break from the game following a seven-year spell at Dortmund that yielded two Bundesliga titles and an appearance in the 2013 Champions League final. However, he would be keen on returning in the Premier League and is unlikely to have issues with the transfer committee structure in place at Liverpool, having delegated over player recruitment at Dortmund.

Klopp’s availability is likely to have been a factor in FSG’s decision to sack Rodgers ahead of the international break. Liverpool have not appointed a caretaker manager following Rodgers’ dismissal, leaving training duties to the assistant manager, Sean O’Driscoll, and the first team coach, Gary McAllister, and aim to have the new man in place for the trip to Tottenham Hotspur on October 17th.

FSG said it intended to appoint in a “decisive and timely manner” when announcing the Northern Irishman’s departure. Though Ancelotti is also out of work and has admirers at Liverpool, the club’s first choice is Klopp and an official approach is expected early this week.

Philippe Coutinho, meanwhile, has been withdrawn from the Brazil squad for their forthcoming World Cup qualifiers against Chile and Venezuela due to a groin problem.