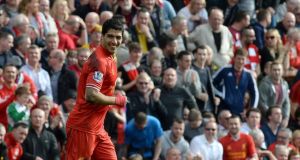 Liverpool managing director Ian Ayre admits rivals clubs will “rattle their cage” trying to lure Luis Suarez away from Anfield but he is confident the striker is set for a long stay.

Manchester City are the latest to be linked with a big-money bid for the Barclays Premier League’s 29-goal leading scorer, but Ayre brushed that off as coming with the territory of having one of the most in-demand players in world football.

The 27-year-old signed a new contract in December, less than six months after trying to manufacture a move away in search of Champions League football.

And Ayre believes, with the club in a race for the title, there remains a mutual understanding between the two parties after the club stood by him during his bans for racist abuse towards Patrice Evra and biting Branislav Ivanovic.

“There has been a lot written about Luis and he is a fantastic individual and we know he loves this club and the fans and has repaid anything he has done wrong in full,” Ayre told BBC Radio Five.

“We have always been supporters of Luis and he has stuck with us and is having probably the best season of his career. All the conjecture which went around last summer leading up to the January window was dispelled by the fact he signed a new contract.

“I think when you have a player like Luis, that is going to be a perennial issue. The important thing is we remain committed together. We have supported Luis through thick and thin and he has done the same by signing up to a new long-term contract recently.

“We would expect that to continue, but we’d also expect people to come in and rattle our cage every transfer window. The most important thing was Luis said from the outset, when people started showing an interest in him, he wanted to play Champions League football and where better to play that than England’s most successful Champions League team?

“We love having him as part of the club and I know he loves being here so we would expect that to carry on. We don’t want to sell Luis Suarez and we’ve been consistent with that in every transfer window since he came here.

“We are a team on the up and he is a fundamental part of what we are trying to achieve. We would never want to sell Luis Suarez.”

The England skipper only agreed a new 24-month deal last summer and, although talks will undoubtedly take place, nothing has happened so far.

“No, absolutely not. It is not a discussion we have had,” Ayre said when asked whether a new contract had been agreed. “But it is not because it isn’t a discussion we won’t have. He is part of the heartbeat of this club and, as long as Steven wants to be here and we want him to be here, it won’t be a difficult conversation, but it is not one we’ve had recently.”