Swedish striker has had a ‘phenomenal’ impact at Manchester United, the manager said 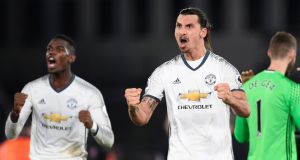 Manchester United’s Zlatan Ibrahimovic celebrates after netting the sinner for his side against Crystal Palace in their Premier League clash. Photo: Tony O’Brien/Reuters

The outspoken 35-year-old arrived at Old Trafford to much fanfare in the summer given his unerring knack of finding the net and medal-laden CV.

Few expected Ibrahimovic to have such an impact at United, though, given his advancing years and their punishing fixture schedule.

The striker has featured in 24 of United’s 26 matches this term but shown few ill effects, scoring his 14th goal of the campaign in Wednesday’s 2-1 win at Crystal Palace.

Asked if it was almost impossible to leave Ibrahimovic out, Mourinho said: “It is, it is.

“But tomorrow is the last effort and then they will have a week without football and that week is a week that my players they need, especially a guy like him, a striker.

“Sometimes in other positions you can hide yourself a little bit more, you can protect yourself with experience, with position.

“As a striker, I think it’s one of the impossible positions where you can hide.

“He is doing phenomenal. Tomorrow he is going to play again, then one week to rest.”

The break between the trip to West Brom and St Stephen’s Day clash with Sunderland will be welcome respite for a player Mourinho will handle intelligently during the festive period and beyond.

“I knew even by the physical point of view he could resist, but obviously he cannot play 60 matches. I must give him a rest.

“I must let him out again. He was suspended against Arsenal so that game he didn’t play.

“But as our target striker, we can say that he is the only one and the way we normally play we need him.”

Ibrahimovic could be joined in the starting line-up at West Brom by Chris Smalling after the England defender recovered from a foot complaint.

Out since October 23rd, his return is a welcome boost to a defence without Eric Bailly due to a knee injury sustained in midweek.

“I don’t know how long,” Mourinho said when asked about the severity of the problem. “No surgery.

“By the movement on the pitch we thought meniscus but no. It’s a question to see the evolution.

“Hopefully we have him for these last two matches at home.”

Bailly will join Henrikh Mkhitaryan and Luke Shaw on the sidelines for a match that will see the Baggies attempt to equal their Premier League club record of four consecutive home victories.

Early-season pressure on Tony Pulis has become a distant memory, with just one loss in six matches propelling the Baggies up to seventh

Mourinho has long been an admirer of the West Brom boss, saying 18 months ago that if he owned an English club he would look to make Pulis his manager.

“In England? For sure (I’d appoint him),” Mourinho said.

“I think (British managers are overlooked) because there are different kinds of profiles.

“Real Madrid, Inter, Barcelona, Bayern, Juventus, Dortmund — if you manage these big teams obviously the targets are impossible for people like Tony Pulis, Alan Pardew, Mark Hughes, David Moyes. All of them.

“So he has lots of trophies. By trophies I mean reach the target and he did that. Like some, never relegated is a big trophy.

“You are not expecting Sam (Allardyce) to be champion in the clubs that he was managing.

“So for me, yes, English managers are not looked (at) as they should.”