John Terry own goal sees Chelsea slip up at Palace 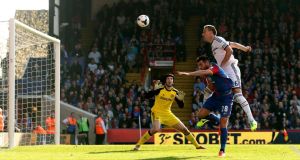 Chelsea defender John Terry is pressurised by Joe Ledley of Crystal Palace and heads the ball over his goalkeeper Petr Cech to score an own goal during the Premier League match at Selhurst Park. Photograph: Scott Heavey/Getty Images

Chelsea entered the weekend as leaders, having played more games than their title rivals Manchester City and Liverpool, and with an unbeaten record in London derbies this term.

The Blues beat Arsenal 6-0 last weekend for a sixth capital success of the season, but in their 10th London derby a John Terry own goal saw Palace claim the win for a first league victory over Chelsea in nearly 24 years.

It was the Blues’ second successive away loss following the controversial defeat at Aston Villa, which left Mourinho questioning referee Chris Foy’s performance.

Only Palace could have cause to complain at Lee Mason’s officiating, as twice in the space of two first-half minutes the referee rejected penalty claims when Gary Cahill challenged Cameron Jerome and then Yannick Bolasie.

Both might have been given in other circumstances, but Palace, who were organised, resilient and dangerous on the counter-attack, put the incidents behind them to earn victory.

Tony Pulis’s men had chances before and after Terry rose above Joe Ledley to divert Joel Ward’s cross into his own net early in the second half.

Bolasie – and Andre Schurrle at the other end – were unable to convert menacing crosses, while Jerome hit a post.

Julian Speroni twice denied Eden Hazard, the second a stunning save when the Belgium forward was through one-on-one, as Palace ended a five-match winless streak with a much-needed victory.

Mourinho had cause to speak to a ball-boy in stoppage time after feeling the ball was being returned slowly as his side slipped to defeat ahead of Wednesday’s Champions League quarter-final first leg at Paris St Germain.

In a match of many sub-plots it was another fine performance from Southampton’s England contingent that will make the headlines after they comprehensively beat Newcastle 4-0 at St Mary’s.

Much of the build-up surrounded two men involved in high-profile incidents, with this match the first time former Saints boss Alan Pardew has been allowed into a stadium, albeit banned from the touchline, since head-butting Hull’s David Meyler.

There was also scrutiny on referee Andre Marriner as he returned to action just a week after his embarrassing gaffe in Chelsea’s win against Arsenal, although the main talking point after a fine 4-0 win for Saints was the display of their World Cup hopefuls.

Mauricio Pochettino’s side created 14 chances in the first half alone, although it took until stoppage time in the first period for Jay Rodriguez to eventually find a way past the inspired Rob Elliot on the Republic of Ireland goalkeeper’s first league start of the season.

Rickie Lambert unselfishly provided the assist for the opener and had one of his own soon four minutes into the second half, before Adam Lallana rifled home an outstanding 25-yard strike to put Saints out of sight.

The Saints captain appeared to be growing frustrated with Marriner’s apparent attempt to avoid dishing out cards, with the referee only brandishing a yellow to Massadio Haidara with 14 minutes remaining.

The referee’s display will no doubt be closely examined after a match which Saints managed to extra gloss through Rodriguez’s fifth goal in four matches.

Peter Odemwingie continued his fine goalscoring form as Stoke recorded their third successive victory with a 1-0 triumph over Hull at the Britannia Stadium.

Odemwingie struck in the 62nd minute, firing in from the edge of the box after collecting the ball from a stray Ahmed Elmohamady pass to register his fourth goal in three games, and fifth since joining the Potters from Cardiff in January.

The hosts had earlier been indebted to their goalkeeper Asmir Begovic when he kept out a David Meyler shot that had taken a wicked deflection, and in the first half Hull defender Liam Rosenior failed to make the most of a good chance.

Overall, though, Stoke were good value for a win that takes them to 40 points for the campaign with six more games to go.

Mark Hughes’s men are finishing his first season in charge strongly, having lost only one of their last nine matches and won four of their last five.

They are 10th in the table and their hopes of improving on their best-ever Premier League final position of 11th and points tally of 47 this term is looking increasingly realistic.

Hull, meanwhile, are 14th on 33 points, seven points above the relegation zone.

A brace from Jonathan de Guzman fired Swansea to their first win in 10 games and gave them some much-needed breathing space above the relegation scrap as they beat Norwich 3-0 at the Liberty Stadium.

The Welsh side had never beaten the Canaries in their five Premier League meetings before this match. But two clinical finishes from the Dutchman plus a 75th-minute goal from winger Wayne Routledge banished that bogey.

Substitute Mats Daehli snatched a potentially priceless point for Cardiff in a crazy finish to their relegation clash against West Brom which ended 3-3 at The Hawthorns.

Daehli turned and fired an injury-time equaliser past Baggies goalkeeper Ben Foster just moments after Thievy Bifouma looked certain to have grabbed a first home win for boss Pepe Mel at the other end.

The late drama summed up a wildly open game in which the visitors were lucky to still be in with a shout after a torrid first 10 minutes.

An outrageous second-minute opener from Morgan Amalfitano and a second from Matej Vydra had threatened to put the home side out of sight as the day looked like it was turning into a nightmare for Cardiff manager Ole Gunnar Solskjaer.

Thievy had other ideas, turning in Stephane Sessegnon’s deflected shot in injury time to spark wild celebrations on the home bench.

But with referee Michael Oliver looking at his watch, there was still time for Wilfried Zaha to make inroads down the right and send in a cross from which Daehli grabbed another barely believeable equaliser.

At the end of the day a point was what neither side wanted after 90 minutes of high-octane and often kamikaze action.