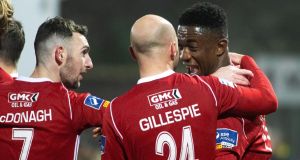 Junior Ogedi-Uzokwe netted his second Derry City hat-trick of the season following this demolition of Finn Harps at the Brandywell to secure Europa League football next season.

Harps made 11 changes from the team that defeated Waterford last weekend, the Donegal men’s thoughts focused on next week’s promotion-relegation battled against Drogheda United.

In fact, Harps’ supremo Ollie Horgan was not at the Brandywell as he was in Drogheda watching the second leg of the playoff game.

After a slow start when Ally Gilchrist, David Parkhouse and Barry McNamee all wasted early scoring chances Derry broke the deadlock with a superb team goal in the 15th minute.

Working the ball forward on the left with accurate one-touch football, the move ended with McNamee threading an incisive pass to Ogedi-Uzokwe and the Colchester United loanee finished with aplomb.

That goal fashioned great confidence with the home side beginning to dominate the possession and in the 23rd minute Junior netted Derry’s second goal.

Having forced three successive corner kicks, McNamee’s centre found the head of Parkhouse and while his effort was hacked off the goal-line, Ogedi-Uzokwe pounced to drive the loose ball home from point blank range.

Well in control at the break, Derry appeared to take their foot off the pedal during the early stages of the second period.

Indeed Derry goalkeeper Peter Cherrie pulled off a superb stop in the 55th minute when Michael Place got onto the end of a Niall Logue centre when inside the six yards area.

However, they increased their lead when Ogedi-Uzokwe netted his third strike having raced into a ball over the top to give Harps’ debutante goalkeeper, Jamie Bell, no chance.

And it was 4-0 in the 76th minute when the impressive Ciaran Coll broke on the left and his pass found fellow roving full back, Grant Gillespie, the Scot sending a powerful drive to the net.

Stephen O’Donnell’s Pat’s side arrived with an outside chance of qualifying for Europe but first-half goals from Dane Massey and John Mountney left them needing miracles at the break and an own goal by the unlucky Brendan Clarke followed by a late header from Georgie Kelly sealed the champion’s win at Oriel Park.

O’Donnell received a warm reception from the home support and Pat’s started well with Chris Forrester trying his luck from distance before Conor Clifford fizzed a low ball across the six-yard box that just evaded the incoming James Doona.

Gary Rogers was relieved to see a thunderous Doona drive hit the side netting in the 20th minute and Dundalk edged in front just two minutes later when Massey met a Mountney free-kick with a delightful header that squeezed inside Brendan Clare’s right-hand post.

That knocked the wind out of the visitors and Patrick Hoban was denied by Clarke after rising to meet a Kelly cross just shy of the half hour. The Lilywhites hitman was then slightly fortunate to get away with just a booking after leaving the Pat’s goalkeeper in a heap with a late challenge.

With Derry leading 2-0 at home to Finn Harps, the Saints’ European hopes were all but extinguished two minutes before the break when Kelly ran onto a sublime Robbie Benson pass to effortlessly slide his shot past Clarke.

With the result all but secure, attention turned to the race for the Golden Boot in the second half with Derry City’s Junior Ogedi-Uzokwe’s hat-trick against Harps moving him clear of Hoban on 14 goals.

The Lilywhites number nine, who worked tirelessly throughout, looked to have pulled level just past the hour mark when Dundalk broke on a rapid counterattack. Mountney set Kelly clear on the right and his cross was met by the Dundalk striker but his effort rebounded off the back of Clarke and crept over the line with the officials ruling it to be an own goal.

Rogers made a fantastic stop to deny Forrester as Pat’s went in hunt of a consolation but Kelly put the icing on the cake in the 89th minute when he hammered home a Massey cross.

Shamrock Rovers signed off their campaign on a high with a fine display to see off Cork City at Tallaght Stadium.

Leading 2-0 at half-time after strikes by Jack Byrne and Lee Grace, the Hoops could have added more in the second half but this win nevertheless gives them a highest points-per-games tally since they won the league in 2011.

Byrne was outstanding and he had the opening goal in the 16th minute, finishing from outside the area after Seán Kavanagh had intercepted a loose pass out of the City defence.

Ten minutes later, the lead was doubled, Byrne providing the assist from a corner kick to allow Grace to crash a header home.

It was almost 3-0 before half-time, Graham Burke rifling a shot off the post after Kavanagh’s cross, though teenage striker Ben O’Brien-Whitmarsh twice went close to pulling a goal back for City.

On the resumption, Rovers were in control again and but for City goalkeeper Tadhg Ryan, a third goal would have arrived sooner, denying Byrne and Aaron Greene before Burke curled home a free kick on 74 minutes.

Derek Pender bowed out in glory with the winner from the penalty spot as Bohemians came from behind to give their inspirational captain the ideal retirement gift.

With their return to Europe for the first time in eight years confirmed last week, this proved a celebratory finale to the season for Bohemians, securing third place as they bade farewell to right back Pender, 35, after a 17-year long career.

Sligo stunned the big home crowd when finally sparking the game to life on 31 minutes with a goal out of nothing.

Kris Twardek skipped clear on the right to cross for the in-rushing Daryl Fordyce to poke home.

Bohemians needed something special to get back into the game and it duly arrived on 58 minutes.

Danny Grant was upended by Johnny Dunleavy on the edge of the area.

Danny Mandroiu did the rest, curling his right-footed free kick up and over the wall and in off a post.

Then came Pender’s moment on 81 minutes, sending Luke McNicholas the wrong way from the spot after the Sligo goal keeper had fouled Andre Wright.

Waterford completed the campaign in fine style by easily accounting for relegated UCD courtesy of a pair of goals in each half.

Duggan then gifted the Students an equaliser nine minutes later by fouling Dara Keane in the box, allowing Jack Keaney convert the penalty.

On the stroke of half-time, substitute Georgie Poynton regained the lead for the Blues from the spot before two more straight after the restart killed off the visitors.

Elbouzedi rifled into the top corner on 48 minutes and he crossed for O’Connor to nod in the fourth four minutes later. Keaney reduced the arrears with another penalty five minutes from full-time.

Defender Luke McNally scored a hat-trick as Drogheda United progressed to the promotion playoff final with a 5-1 win over Cabinteely at United Park.

Chris Lyons and Jamie Hollywood were also on target for the home side after Kieran Marty Waters had briefly drawn the visitors level early in the second half.

The sides had drawn 1-1 when they met in Dublin last week, with Jake Hyland’s late goal cancelling out Waters’s opener.

Drogheda hit the front 10 minutes from the end of a poor first half as McNally’s header rebounded back into his path and the St Patrick’s Athletic loanee swept home the rebound.

The game exploded into life in the second half and Cabo levelled seven minutes after the restart when Jack Tuite’s header saved by Luka Gratzer but Waters was on hand to turn home the loose ball.

Drogs regained their lead inside three minutes as McNally met Seán Brennan’s corner with his head to finish from close range.

The defender had his hat-trick two minutes later as he arrived late in the box to sweep home a Mark Doyle cut-back.

Chris Lyons scored the pick of the goals moments late with a low curling finish before sub Jamie Hollywood rounded it off from close range.