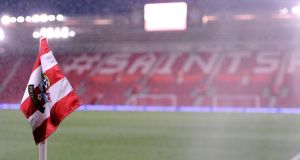 Southampton said it will work with Hampshire Police as a major probe into historical child sex abuse in youth football continues up and down the country. Photo: Andrew Matthews/PA Wire

With 18 police forces in the UK now investigating leads from at least 350 victims and fresh allegations coming in every day, it feels like football’s sexual abuse scandal is only just beginning.

Here, we look back at how the events in this dark story have unfolded over the last fortnight.

November 16th: In a harrowing interview, former Crewe youth player Andy Woodward tells The Guardian how he was sexually abused as a boy in the 1980s by a former coach and scout. The 43-year-old, who went on to play for Bury, waived his right to lifelong anonymity to speak out.

November 22nd: A second Crewe player, Steve Walters, tells The Guardian about his abuse by the same coach, while former Spurs, Liverpool and England forward Paul Stewart speaks to the Daily Mirror about his treatment by a different youth coach in the 1970s.

Cheshire Police confirms “a number of people” have come forward with allegations in the wake of Woodward’s interview and Professional Footballers’ Association chief executive Gordon Taylor says the number of former footballers to contact the union with similar claims is in “double figures”.

November 24th: Crewe director of football Dario Gradi releases a statement saying he knew nothing about the allegations at his club until a coach was convicted in 1994. Manchester City announce they are ”undertaking a thorough investigation” into allegations of wrongdoing in their youth system in the 1970s and 1980s.

England captain Wayne Rooney publicises a new, confidential, 24-hour helpline set up by the FA and the NSPCC — the child protection charity later reveals it received 50 calls in its first few hours.

November 25th: Two more former Manchester City youth players tell the BBC’s Victoria Derbyshire programme about the abuse they suffered as boys, while police in Hampshire, London and Northumbria confirm they too are investigating new allegations.

November 26th: After mounting pressure, League Two side Crewe announce the club is to launch an independent review into how they dealt with child abuse allegations in the 1980s and 1990s.

November 27th: The FA announces that Kate Gallafent QC will lead an independent review of its response to the allegations in the past.

Football Association chairman Greg Clarke tells reporters this is one of the game’s “biggest” crises and former darts world champion Eric Bristow is dropped by Sky Sports after a series of insensitive tweets about football’s sex abuse victims.

November 30th: Former Newcastle player Derek Bell tells the BBC 5 Live he wanted to kill his abuser George Osmond, who was convicted in 2002, while Stewart names former Blackpool youth coach Frank Roper, who died in 2005, as the man who abused him.

December 1st: Two former Southampton players are interviewed by BBC South on the sexual abuse they endured from an unnamed coach, Newcastle player David Eatock tells The Guardian he was abused by Osmond aged 21 and NSPCC chief executive Peter Wanless says the helpline had 860 calls in its first week.

December 2nd: The Daily Mirror reports that former Chelsea player Gary Johnson signed a confidentiality agreement with the club in 2015 in return for £50,000 after he alleged he had been abused by chief scout Eddie Heath, who is now dead, in the 1970s. With many questioning the ethics of such an agreement, the club waived it, allowing Johnson to speak out.

Later, it was announced that Southampton had become the latest club to open an investigation into allegations of historical sexual abuse.