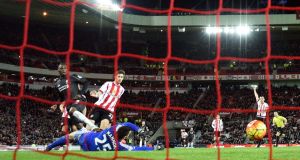 Christian Benteke’s goal was the difference for Liverpool as they ground out a 1-0 win away at Sunderland. Photograph: AFP

The final Premier League fixture of 2015 left Liverpool seventh and Sunderland seven points adrift of safety. While Christian Benteke’s latest goal against opponents he cannot seem to stop scoring against entitles Jurgen Klopp to think about a return to the Champions League the Wearsiders appear entrenched in 19th position.

With only Aston Villa confronting a worse plight, Saturday’s game here between the bottom two threatens to be a dress rehearsal for Championship combat next season but Sunderland have only themselves to blame.

After flattering to deceive in the opening half Sam Allardyce’s side regressed to all too familiar bad habits during a second period when, without being anywhere near their best, Liverpool’s football might have been from another planet.

In an untidy start Sebastian Coates, perhaps momentarily forgetting he was no longer a Liverpool player, gifted possession to Philippe Coutinho. The centre-half watched in alarm as Coutinho played in Roberto Firmino, but the forward’s touch was heavier than you would expect of a player who cost €39m, the ball bounced awkwardly and Coates was reprieved.

Injuries to Younes Kaboul and John O’Shea dictated that Wes Brown, very much a forgotten man on Wearside, returned to the home defence alongside Coates and enjoyed a reasonably quiet re- introduction to first team life.

Admittedly there was a slightly worrying moment when Coutinho held Lee Cattermole off before manoeuvring himself into the space required to curl a long range shot wide of the post but, at the other end, Jermain Defoe cut inside sharply before forcing Simon Mignolet to tip another shot over the bar.

Liverpool were dominating possession but, worryingly for Klopp, were far from in control. In contrast Allardyce will have been encouraged by the albeit fragile sense that Sunderland were, at long last, beginning to bear a few of the hallmarks traditionally associated with his teams.

Showing off some long craved organisational discipline and defensive resilience, Sunderland also offered sporadic threats on the break. One of the best such attacking cameos arrived when Fabio Borini aimed to jog a few memories among his former Merseyside employers by curving a shot fractionally the wrong side of a post.

Perhaps noticing Klopp’s technical area frown, Nathaniel Clyne advanced from right back to unleash a cross in Firmino’s direction. If Mannone - once again preferred to Costel Pantilimon in Sunderland’s goal - seemed pleased to palm the resultant header to safety, Allardyce was still assessing the fall-out from an enforced reconfiguration of his side in the wake of Jack Rodwell’s latest injury.

Rodwell is so desperate to remain fit the midfielder recently submitted himself to 50 injections in the space of five days spent at the controversial Munich clinic of Hans-Wilhelm Muller-Wohlfahrt but he lasted barely half an hour here before limping off to be replaced by Duncan Watmore.

No matter; the first half concluded with Sunderland looking distinctly convalescent. Unfortunately local optimism proved swiftly dashed as they suffered a relapse only 22 seconds into the new half.

Surrendering possession near the halfway line represented a regression to familiar old bad habits and Clyne was allowed to dispatch a ball into the box which Adam Lallana flicked on towards Benteke.

From around seven yards out, the centre forward dinked it beyond Mannone and Allardyce’s game plan was reduced to tatters. He is extremely unlikely to have been impressed by the ease with which Benteke - who has now scored six goals in seven Premier League games against Sunderland for Liverpool and Aston Villa - stole behind Brown and Coates.

Refusing to abandon hope, Cattermole kept endeavouring to cajole his team-mates forward but getting behind Klopp’s defence proved near impossible.

Although Benteke shot straight at Mannone when clean through it held firm on a night when Lens was arguably lucky to be only booked for a nasty tackle on Mamadou Sakho.