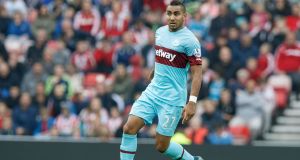 West Ham’s Dimitri Payet: Suddenly – or so it seems – he is flavour of the month. Photograph: Steve Welsh/Getty Images

Dimitri Payet is 29 in March. It’s been a season of surprises in the Premier League and Payet’s birth date brings another.

Just how he has reached the age he is with the talent he has without the sort of recognition he merits makes you wonder. And not just about Payet.

He and his career raise questions. Payet possesses a sure-footed certainty when he receives a ball and appears to have some of that snooker player’s sense of what comes next – “I could think six shots ahead,” said Alex Higgins.

But Payet’s career, and pre-career, contains less clarity and West Ham fans’ song – “We’ve got Payet, Dimitri Payet, I just don’t think you understand” to the tune of Achy Breaky Heart – is not inappropriate.

In the first instance, Payet’s ability means a question arises about what a senior career spent at Nantes, St Etienne, Lille and Marseilles – before West Ham United – says about his application or his personality. Or, perhaps, his agent.

That list is not exactly Nantes, PSG, Juventus, then Real Madrid – an upward trajectory. Hence Payet has arrived at West Ham with a CV that offers only a hint of the skill he has revealed in his six months in the Premier League.

Although 15 France caps are on that CV – the first being in 2010 – related facts are that Payet was not named in the French Euro 2012 squad by Laurent Blanc or in the World Cup 2014 squad by Didier Deschamps. Blanc deemed Payet less worthy of a place than, for example, Yann M’Vila, while Deschamps felt Morgan Schneiderlin offered more.

Where was Payet? It seems that he has been on the radar a long time in France but his visits to the centre have been fleeting.

It began on the opening weekend when West Ham won 2-0 at Arsenal. This was Payet’s Premier League debut. In a way that result and West Ham’s next two away from home – a 3-0 win at Liverpool and 2-1 win at Manchester City – set the zig-zag pattern before Leicester took it on.

Michu had been at Real Oviedo, Celta Vigo and Rayo Vallecano before he announced himself as Swansea’s game-changer. He was 26 when he made his goalscoring Premier League debut for Swansea in a sunny 5-0 win at QPR in 2012. A season later Michu was pivotal to Swansea’s League Cup triumph.

Payet was 28 when he turned out at Arsenal. He has been turning expectations since.

Before that match there had been general uncertainty about West Ham. Sam Allardyce had departed with the club having finished 10th, 13th and 12th in his three seasons in the top-flight following promotion.

Slaven Bilic arrived as manager and his priority seemed to be to exit the Europa League as quickly as possible. This Bilic achieved, meaning he could concentrate on assimilating some new, expensive recruits such as Payet, for £10.5 million (€15 million) from Marseilles.

After all, the end of the season is to see West Ham leave Upton Park and go to the Olympic Stadium.

They did not want to make that move as a Championship side.

The 35 points accrued already means that won’t happen and instead West Ham are looking at European football in the Olympic Stadium.

And Payet is looking at Euro 2016 and a starting place in the opening game: France v Romania. Suddenly – or so it seems – he is flavour of the month.

This must be provoking wonder among those who have known Payet along the way. Like Michu, Payet is evidence that players mature at different rates and ages; development is not a science.

As an industry, though, football still hurtles after often fragile and often misleading teenage potential, when there are experienced, near-finished articles already lurking in the professional game.

Payet fits the latter category now; but he was once in the former. Born on the French colony of Réunion Island, east of Madagascar in the Indian Ocean, at 12 Payet was flown to Le Havre to begin a career in football.

What scouts obviously saw was a precociously talented boy, but what clubs sometimes do not see is the boy’s childhood; and their own impatience.

Payet was 6,000 miles away from home. He says Réunion has an “African feel” and here he was in northern France, which can be cold. The picture painted now is that after four occasionally troubled years, Payet went back home to Réunion. It was two years before he returned to France with Nantes.

This is not to single them out. There are countless examples of clubs investing time in teenagers only for their patience to run out when boys are still becoming men. It poses other questions concerning the purpose and viability of academies. Le Havre invested four years; Marseilles got €15 million.

Realistically, how many 12-year-olds who start to truly reveal maturity at, say, 25 will receive 13 years’ education, tolerance and, from 16, pay?

In Le Havre’s case, Payet’s spats along the way with Fabien Barthez and Blaise Matuidi will have confirmed some doubts about Payet’s temperament. Then again, he has played for Marseilles under Marcelo Bielsa, for St Etienne in Europe and when Payet signed for Lille, they were French title holders. He joined them in the Champions League, with Eden Hazard and a certain Joe Cole alongside.

Cole should recognise all of this – West Ham thought he was the next Gazza. Cole won his medals with Chelsea.

As if. But exaggeration and premature expectation are part of football’s condition. Dimitri Payet will surely understand.