Chris Coleman leaves Wales to take over at Sunderland 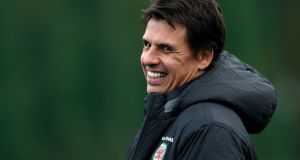 Chris Coleman has agreed to become the new Sunderland manager. The 47-year-old is expected to be confirmed as Simon Grayson’s successor over the weekend in what will be a major boost for Sunderland and a huge blow for the Football Association of Wales, which had hoped to persuade Coleman to sign a new contract.

The FAW held a board meeting on Friday to discuss his position, with both parties previously involved in lengthy talks about extending the deal that expired at the end of this month, but Coleman has decided that the time is right to return to club management and has agreed to take the plunge with Sunderland.

His appointment is something of a coup for Sunderland, who are bottom of the Championship and staring at the prospect of back-to-back relegations. Robbie Stockdale will remain in charge in a caretaker capacity for Saturday’s home game against Millwall, with Coleman set to be in the dugout for the first time on Tuesday night, when Sunderland travel to Aston Villa.

Northern Ireland manager Michael O’Neill, Paul Heckingbottom, who is in charge at Barnsley, and Ally McCoist were among the other candidates considered for the Sunderland post, but Coleman emerged as the clear frontrunner. The decision to take over at the Stadium of Light would appear to be something of a gamble on his part given Sunderland’s problems over the past few seasons, but it is a club with huge potential and Coleman has the personality to make an instant impact.

Coleman’s decision to leave international football will come as a massive disappointment to the Wales players, who made their feelings known as to how desperate they were for him to continue in the job after his spectacular success.

Appointed as the late Gary Speed’s successor in January 2012, Coleman will go down as the most successful manager in his country’s history after leading Wales to the European Championship semi-finals last year. During his last game in charge, against Panama on Tuesday, the Wales supporters repeatedly urged him to stay on. – Guardian service