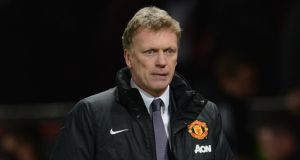 David Moyes said that Manchester United were suffering from a “mental softness” and that he did not expect the champions to sink so low as they did in the 2-2 draw with Fulham at Old Trafford.

The visiting manager, Rene Meulensteen, who left the champions’ coaching staff in the summer, was also critical of United, branding their continual crossing as “partly straightforward” and easy to defend against.

Moyes’s side were facing the ninth defeat of their title defence, and to the bottom-placed club following Steve Sidwell’s opener, until the equaliser from Robin van Persie, on 78 minutes. Then Michael Carrick’s goal moments later looked to have snatched victory. However, four minutes into added time, Darren Bent completed a miserable afternoon for United by securing a draw for Fulham, a goal the Scot described as “diabolical”.

Moyes has continually stated it would be a turbulent first season in charge but with United now nine points from a Champions League berth, the manager admitted he did not expect his inaugural campaign to be so dire.

“Probably not, no,” Moyes said. “Today was as bad as it gets. How we didn’t win, I have no idea. It’s goals that count.”

‘Deserved to win’
Despite a record 81 crosses, Moyes accepted it was the familiar problem of not being able to put the opposition away. “I agree. Quite often you’ve seen similar games here where we have been the better team by far, the opposition have got a goal from a set-piece or on the break and then we’ve been chasing it, but we thoroughly deserved to win the game.”

Bent’s goal derived from Nemanja Vidic’s weak header. While Moyes did not name his captain, he was scathing about the manner of the goal. “Even when it was 2-1 and they put five minutes [of added time] up Fulham never came up the pitch, they left us with the ball. So it was nearly a case of just playing out time and we gave away a diabolical second goal. If we had one failing it was that we should have gone to win 3-1. You could use maybe mental softness that we didn’t see the job out.”
Guardian Service