Pirlo dilemma for Juventus ahead of Monaco quarter final 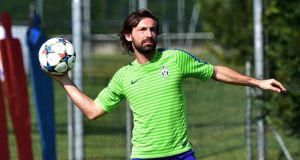 Juventus coach Massimiliano Allegri faces a tricky dilemma for their Champions League clash against AS Monaco as he tries to decide whether to field Andrea Pirlo after the playmaker’s recovery from injury.

Pirlo has not played since he suffered a calf strain against Borussia Dortmund seven weeks ago and, at 35, it could be a risky move to throw him straight into Tuesday’s quarter-final first leg in Turin.

Although he retains the ability to change a game with a single slide-rule pass or majestic free kick, the odd sign of vulnerability has crept into his game especially when trying to play his way out of a tight spot near his own penalty area.

On the other hand, Saturday’s shock Serie A defeat against bottom-of-the-table Parma, when Juventus rested a number of regular players, has suggested their strength in depth may not be quite as impressive as pundits previously thought.

Juventus are also missing their other key midfielder Paul Pogba and, facing Monaco’s miserly defence, Allegri is likely to need all the creativity he can muster to supply attacking duo Carlos Tevez and Alvaro Morata.

Juventus, Italy’s most successful team domestically, are attempting to reach the Champions League semi-finals for the first time since 2002/03.

In the meantime, they have spent one season in Serie B after being demoted in the wake of the Calciopoli match-fixing scandal and then several seasons struggling to re-establish themselves among the Serie A elite.

Now, they are once more the dominant force in Italian football and are well on course for a fourth successive Serie A title with a 12-point lead at the top despite Saturday’s setback.

The form book points to a win for Juventus, who have not lost any of their last 11 European games at home and have only been beaten once in 16 European matches since the new Juventus Stadium was opened in 2011.

However, it is likely to be a cagey affair. Monaco, runners-up in 2004, have scored only seven goals in eight games in reaching the quarter-finals, three of them in a single match away to Arsenal, and have conceded a mere four.

Juventus are equally stingy at the back, having conceded only five goals in the Champions League and 15 goals in 30 Serie A outings.

Monaco, still in the running for the French title, got off to a stuttering start this season after key players James Rodriguez and Radamel Falcao departed to Real Madrid and Manchester United respectively.

But, under Portuguese coach Leonardo Jardim, they have surpassed expectations, qualifying from the group stage at the expense of Benfica, and have been more than happy to accept the role as underdogs.

“But after we knocked out Arsenal, the clubs look at us differently.

“When James and Falcao left and the club did not sign players with international experience, everyone thought that we would just finish in the top 10 in Ligue 1 and we would not pass the group stage in the Champions League, but we proved them opposite.”