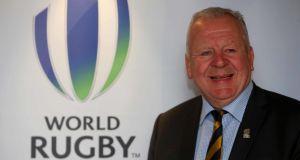 Bill Beaumont has received a significant boost in his bid to be re-elected as World Rugby chairman after the Welsh union announced it is backing the former England captain. Beaumont is now expected to receive unanimous support from the Six Nations countries, which he hopes will be enough to give him the edge in a tight leadership race with Agustín Pichot.

There had been suggestions that Wales was considering giving its support to Pichot, who revealed it was the other member of the Six Nations to engage with him during his bid. But the WRU chairman, Gareth Davies, has announced the union is giving all three of its votes to Beaumont despite some support for Pichot from its board members.

With votes weighted heavily in favour of the more established unions – each of the Six Nations gets three, and Rugby Europe a further two – Beaumont would need only six more for victory, assuming there is no late change of heart from Ireland or Scotland. Pichot has the backing of the Sanzaar nations and the South American federation – worth 14 votes – and has been canvassing for support among the tier-two nations.

While Beaumont’s campaign has been tarnished by the controversy surrounding the nomination to World Rugby’s executive committee of Fiji’s Francis Kean, Wales’s three votes are likely to significantly help his bid. The winner will not be officially announced until 12 May.

“I would like to formally confirm to our member clubs the board’s conclusion to support Bill Beaumont in his bid to be re-elected for a further term,” Davies said. “We have spoken to both candidates and assessed their manifesto commitments in turn. We have digested the dynamic drive for change presented by Agustín and understood the commitment to progress, but also stability and the steady hand provided by Bill.”

The Wales head coach, Wayne Pivac, meanwhile, has claimed his players would relish the prospect of potentially playing up to eight Tests in consecutive weeks in the autumn but conceded they may have to do so away from the Principality Stadium.

New Zealand has already started to ease its lockdown measures but the Aucklander expects the July series against the All Blacks to be postponed, most likely until October. Wales were also due to play Japan this summer, have a postponed Six Nations match against Scotland still to play and also four November Tests. If those are called off a whole new Six Nations championship could be played.

So many consecutive Tests would raise serious concerns over player welfare but Pivac said: “Talking to the players, they just want to get back as everybody does to some sort of normality. If you said to them now that they had to play six, seven or eight Test matches over seven or eight weeks, they’d jump at it and relish that opportunity.”

Pivac also revealed Wales may have to relocate autumn Tests away from their 74,000-seat stadium, which has been converted into the Dragon’s Heart Hospital to help the NHS during the coronavirus pandemic. It is believed Cardiff City Stadium and the Liberty Stadium are possible alternatives.

“If the hospital is still there and we are back playing behind closed doors we could be at another venue,” Pivac said.

Galgorm Castle resort could rescue 2020 Irish Open 11:25
Iain Henderson out for up to 10 weeks after hip surgery 10:26
Leeds sign teenager Charlie Allen from Linfield 10:08
Celtic launch investigation into player’s secret trip to Spain 12:40
Relieved Solskjær says he’s prepared for either Sevilla or Wolves 07:50
Crossword Get access to over 6,000 interactive crosswords