Ulster have a duty to appeal Jared Payne red card

It won’t give them a second shot at Saracens, alas, but they owe it to the player, themselves and the game 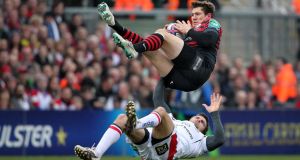 The ERC press release accompanying the decision to suspend Jared Payne for the tackle against Alex Goode of Saracens that resulted in the Ulster fullback’s red card came with the wording that Payne had been red-carded for “an alleged dangerous charge (sic)”, rather than tackling, tapping, pushing or pulling. This was, effectively, a new one. Photograph: Brian Little/Inpho/Presseye

Here’s a question. Supposing Jared Payne and Alex Goode made the exact same runs as when they collided last Saturday week in Ravenhill, which resulted in Goode being stretchered off and Payne being sent off; the only difference being that Payne’s head collided with, say, Goode’s hip, and it was Payne who was stretchered off.

Does anyone for a moment think Jerome Garces would have brandished a red card at Payne as he was stretchered off? Or, even more ridiculously, that having been stretchered off and sent off, Payne would then have received a two-week ban, as was the case last week when an ERC- appointed independent judicial officer, Simon Thomas of Wales, decreed Payne be suspended for two weeks.

Payne was sent off in contravention of IRB Law 10.4(i), which states that “tackling, tapping, pushing or pulling an opponent jumping for the ball in open play” is worthy of a red card. Yet Garces’ eventual interpretation of the fifth-minute incident was that Payne had committed “a dangerous tackle”.

But, patently, Payne did not make a tackle. Nor did he tap, push, or pull Goode. At all times he had his eyes on the ball and his arms and hands were poised solely for a catch.

Wording
Interestingly, the ERC press release accompanying the decision to suspend Payne came with the wording that the Ulster fullback had been red-carded for “an alleged dangerous charge (sic)”, rather than tackling, tapping, pushing or pulling.

This was, effectively, a new one. This was the first example of a player being red-carded for accidentally colliding with an opposing player as they contested a high ball, when not demonstrating a sufficient “duty of care” to his opponent.

If a “duty of care” entails a player having to leave the ground as well, or watch his opponents as well as the ball, then fine. So be it. Let the IRB make that clear. But let’s not make it up on the hoof.

Part of the secret of a player’s success in winning a high ball, after all is, as the cliché goes, they only have eyes for the ball!

It was a hell of a time to come up with a new interpretation, for this is far more than a case of a player being victimised by a new interpretation of the game’s laws. At a stroke, Ulster were severely handicapped in their pursuit of a home semi-final.

That would have earned the IRFU a €450,000 ERC bonus payment and €300,000 for Ulster hiring out the Aviva Stadium, and an estimated €20 million for the Irish economy.

But perhaps even more than that, it denied Ulster a shot at winning the last Heineken Cup as we know it; an opportunity that will never pass the way of Johann Muller, John Afoa and Tom Court again and, who knows, perhaps the opportunity may not present itself to the province again while the remainder of the squad are still playing.

In any event, they will do well to map out a home quarter-final and semi-final again.

Given Payne’s actions were not malicious or deliberate, it’s questionable that the entire team, indeed the entire Ulster organisation, should also be punished so severely.

The episode perhaps gives a greater understanding on this side of the Irish Sea as to why Welsh rugby was so aggrieved over the sending-off of their captain Sam Warburton in the World Cup semi-final against France.

Even if Alain Rolland’s decision was part of a worthy campaign to curtail the growing instances of tip tackling, and was in keeping with IRB directives , it’s also debatable whether the punishment meted out to that Welsh team and Welsh rugby was commensurate with the crime.

The degree to which referees’ decisions materially affect the results of matches is one of the sport’s most unappealing trends.

Wonderful referee though Nigel Owens is, it’s doubtful every other referee would have penalised Jack McGrath for supposedly going off his feet in the 80th minute against New Zealand last November at the Aviva.

Similarly, a referee other than Craig Joubert might reasonably have penalised the nervy All Blacks in that World Cup endgame, or indeed have pinged England against Ireland at Twickenham for side entry at a maul or for offside in midfield. A referee other than Steve Walsh might have penalised Ireland at the final scrum in the Stade de France, denying Ireland the Six Nations title which instead would have gone to England.

In any event, did Payne’s or Warburton’s actions really merit such huge consequences? The two-week suspension shows that, not for the first time in recent years, the judicial process is completely out of sync with the modern game.

Ulster were awaiting the written verdict from the ERC and Thomas over the weekend before deciding to appeal, but they really should appeal. It won’t give them a second shot at Saracens, alas, but they owe it to Payne, themselves and the game.