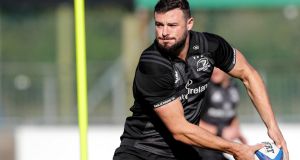 Robbie Henshaw’s dead leg injury has ruled him out since the beginning of February. Photograph: Laszlo Geczo/Inpho

Robbie Henshaw looks set for another week on the sidelines as Leinster face Ulster in a sold out Aviva Stadium in their European Champions Cup quarterfinal on Saturday.

The Irish centre and fullback is once again not taking part in full training with Leinster and is looking to increase his load with a view to being further assessed as the week progresses.

To that back drop it is highly unlikely the 36 times capped back will be thrown into the cauldron of a European quarter-final.

Henshaw’s last appearance was at the beginning of February against England in Ireland’s Six Nations Championship opening match. Leinster coach Leo Cullen rated Henshaw as “less likely, than likely” to make the panel on Saturday.

Cullen added that Henshaw saw a British specialist to address why the dead leg he suffered was taking so long to heal.

“Whatever way the tear in the muscle was . . . the dead leg was initially what the cause of concern was but there was a little bit more damage a bit deeper in,” said Cullen.

“It was a little bit unusual, probably, from initially the way it presented, obviously as a dead leg. He had a little minor procedure done.”

Sean Cronin and Noel Reid are also being monitored. The Irish hooker was removed at half time in Leinster’s game against Edinburgh last weekend with a head injury. Reid departed in the first half with a similar injury. Both players will follow the graduated Return to Play Protocols under medical supervision.

Josh van der Flier also had a procedure carried out last week on a groin injury, which will keep the flanker out for 12 weeks. With his season over, the challenge now will to be fit for the series of friendly matches Ireland has organised as warm up fixtures prior to the Rugby World Cup in Japan.

Outhalf Ross Byrne was a late casualty last week and was withdrawn from the game in Edinburgh after feeling tightness in his foot during the Captain’s Run on Thursday afternoon. He is also being monitored throughout the week.

Some good news for Leinster was that flanker Dan Leavy, scrumhalves Luke McGrath and Nick McCarthy and back Joe Tomane all came through their first games back from injury on Friday night and are available for selection this week.